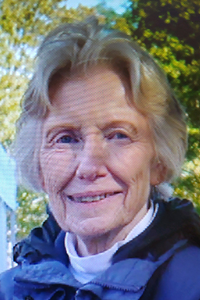 Leone (Kelley) Burns, 87, died Sept. 1 at Christopher Heights Assisted Living in Webster with her family at her side. Her husband of 42 years, Robert C. Burns, died in 1997, 25 years and one day before Kelley’s passing.

She was born July 24, 1935, in Boston and raised in Milton, the daughter of John L. and Georgia (DeLue) Kelley, and graduated from Milton High School in 1953. She earned her bachelor’s degree in communications from Curry College, where she met her husband, and they married Sept. 10, 1955. She lived in Hopkinton for over 50 years before moving to the Residence at Valley Farm in Ashland for three years. She had lived at Christopher Heights since January.

She worked a number of jobs in her lifetime, starting in a bakery shop in Mattapan, secretary at Lam-Pin Corporation in Hopkinton, children’s librarian at Hopkinton Public Library, secretary at Zayre’s offices in Framingham and payroll at B.J.’s Wholesale Club. Of all the positions she held, the ones she most relished were those of mother, wife, daughter, sister, sister-in-law, grandmother and friend.

Kell had a magical touch when it came to gardening and a flair for arranging the beautiful gems she chose from all her gardens. She was very artistic by nature — sewing, braiding rugs, stenciling walls and throwing, glazing and firing her own pottery, which she sold at several polyarts festivals. She also had a love of reading and traveling. After retiring, she visited many places, including Alaska, China, South America and the Panama Canal. If you were lucky enough to sample her cooking, you’d have been delighted. Around the holidays, she worked her fingers to the bone preparing multiple pies for family gatherings.

Arrangements are under the direction of Sitkowski, Malboeuf & Hickey Funeral Home of Webster. Services were to be private. In lieu of flowers, donations may be made in her memory to the Jewish Healthcare Hospice, 646 Salisbury Street, Worcester, MA 01609.