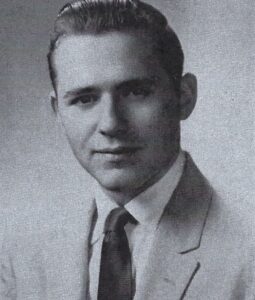 Richard Dexter Sails, son of Dexter and Muriel Sails, was born in 1938 and grew up in Hopkinton at 22 Grove Street. He graduated from Hopkinton High School, Class of 1956.

I met Dick in 1952, when I was 11 years old and he was 14. He was my first patrol leader in Boy Scouts. Dick had all the knowledge of camping, fishing, etc., that I wanted to have, so I spent a lot of time with him learning those skills.

After graduating from high school, he joined the Army and worked in intelligence in Europe until 1960. When he was discharged from the service, he went to college at University of Maine in Orono.

When I returned from the U.S. Navy, I went to work for J.C. Parmenter, where we met again, since Dick had worked there summers during his college days.

Dick’s grandfather had a log cabin on Ragged Lake in Maine. After his grandfather died, Dick took over the lease on the cabin from Great Northern Paper Co. I began going up to the cabin with Dick in 1965, and for the next 25 years or so, we went to the cabin two or three times a year.

Dick taught school in the Rockport, Maine, area for several years. For the rest of his working career, he worked at various plant nurseries.

Dick called me on July 13 of this year. I said, “How you doing, Dick?” He said, “Not so well, I was diagnosed with lung and liver cancer today and have 4-6 weeks to live.” I was speechless and told him I’d be up to see him.

The next week, I was able to go to Orono and spend the afternoon of July 21 with him reminiscing about old times.

Dick passed away on Aug. 17. He was predeceased his parents, his ex-wife, Sally, and his second wife, Jane.

He leaves his son, Jesse, a sister, Kathy and husband Frank Jolly of Connecticut, two nieces and a nephew.

Goodbye my friend of 70 years.

Editor’s note: The opinions and comments expressed in letters to the editor are those of the writers and not necessarily those of the Independent. Submissions should be no more than 400 words and must include the writer’s name and contact information for verification. Letters should be relevant and not primarily for the purpose of promoting an organization or event. Letters may be edited by the Independent staff for space, errors or clarification, and the Independent offers no guarantee that every letter will be published. For a schedule of deadlines for letters and other submissions for the print edition, click here.