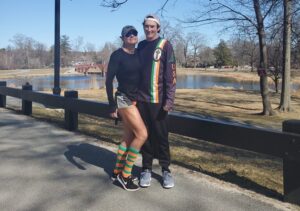 Amelia and Mike Green, the latter of whom grew up in town, are running to raise money for Hopkinton charities.

Amelia and Mike Green have faced numerous challenges in their lives, any one of which could have derailed their ambitions to run 26.2 miles. But the couple will line up to tackle the Boston Marathon on Patriots’ Day this year, a testament to their faith, unity, and determination.

Amelia Green’s first challenge came early in life. She was born with a congenital hip disorder and had to wear a brace until she was 2 years old.

“I wasn’t able to walk normally or do running of any kind, so running is something that has been a godsend for me to be able to do,” she said.

Being able to run is part of what sparked her career in personal training. She now spends her days seeing people succeed and improve as they make strides towards their fitness goals.

Mike Green has wrestled with his own struggles. He and Amelia are a proud sober couple, and he said he has been sober for more than a decade. It was not too long ago that Mike could not have hoped to run even a 5K without stopping. He and Amelia recently competed in the New Bedford Half Marathon and an even longer training run in preparation for Boston.

The road to Boston has not always been smooth. At the start of the pandemic, Amelia said she dealt with a number of debilitating injuries. She was told she would not be able to run, or even do simple activities.

“Michael and I were able to pull it together and have a lot of faith,” she said. “We found a non-surgical route to get me back on track and now we are able to do the marathon. It’s a celebration and hat’s off to God for getting us through this. This is going to be a seal on our success.”

The couple now lives in Grafton, but Mike grew up in Hopkinton, so the Boston Marathon is very much ingrained in his upbringing. Both Amelia and Mike are running for Hopkinton-based entities. Amelia will support the Hopkinton Emergency Fund, which works with existing service organizations to help Hopkinton residents who need temporary emergency financial help. Mike is raising money to benefit the Hopkinton Tax Relief Committee, a fund that was established in 1998 to help residents in need pay their real estate taxes.

Even as the couple became healthier and started running more consistently, the usual hurdles of training for Boston tried their best to slow them down. Mike’s work schedule often required them to run in the pitch black of the cold late winter and early spring nights, dodging icy puddles in search of fresh patches of sidewalk.

The two of them were able to get through the training together, and they plan to cross the finish line on Boylston Street the same way. It will be the latest and greatest of the physical challenges that have become part of their journey together.

“I am always making Michael do some crazy things, whether it’s hiking up a mountain or biking a long distance and he always seems to sign off on it,” Amelia said. “That’s true love right there.”

← Letter to the Editor: Mannan for Select Board Hopkinton Today: Monday, April 11 →