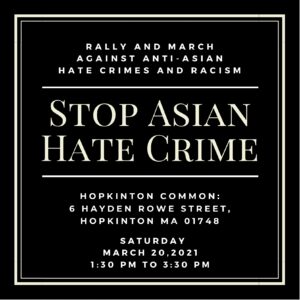 The Hopkinton Chinese American Association is planning a rally and march this Saturday from 1:30-3:30 p.m. at the Town Common to call awareness to anti-Asian hate crimes and racism.

The event was spurred by this week’s mass shooting in Atlanta, where six of the eight fatalities were women of Asian descent. Although the suspect, a 21-year-old white male, reportedly denied targeting Asians, it was the latest in a number of high-profile incidents of violence and bias toward Asians.

A group called Stop AAPI Hate (referring to Asian-Americans and Pacific Islanders), formed last March to combat discrimination during the COVID-19 pandemic, reported that there have been 3,795 hate incidents reported against Asian-Americans and Pacific Islanders over the last year. The largest group reporting hate incidents was Chinese people, at 42.2 percent.