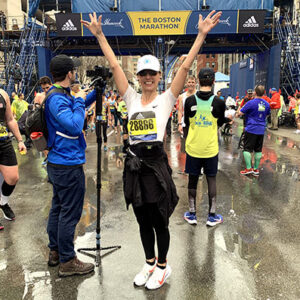 Selectman Brian Herr completed his 30th and final Boston Marathon, with his wife and children joining him for the last few miles — “A nice surprise,” Herr said.

Herr, who defied doctors and battled his way back to the marathon after suffering a major leg injury while skiing a couple of years ago, said overall it was a “great, albeit slow, day,” as he crossed the line in 5 hours, 36 minutes.

Herr said the weather — pouring rain in the morning gave way to a warm and dry midday followed by more rain and strong winds in the late afternoon — was not a problem.

While his marathon days are behind him, Herr said he won’t give up running altogether.

“Looking forward to 5Ks and the occasional 10K for years to come,” he said. …

Kathy Curry also said 2019 was her last Boston Marathon, although she admits that she “retired” three times previously only to return, “so, you never know.”

Curry said she made it a point to “thank everyone along the way,” which made the experience more special.

Said Curry: “Due to many issues, I was not trained as well as I would like, but enough to get the job done. Sometimes this is the hand you are dealt, and that is OK. My goal was to raise at least $7,000 — done, thanks to many generous donors — hope for good weather — best weather of my eight Boston runs — and to enjoy every moment of the marathon.” …

Joy Donohue completed her third Boston, and she said the weather had a huge effect.

“During the race, there were several weather belts that were challenging,” she said. “Humid and rainy in Hopkinton; hot, sunny and tropical in Natick around Miles 10-14, then at race end in Brookline around Mile 22, cool rain which felt like gold raining from heaven. It was so needed.  I was overdressed with light insulating rain gear and overheated at Mile 10, and had to stop, take off my jacket with the help of a fan, re-pin my bib and carry on. Complete time-waster, too. In addition, for the first time ever, I got huge cramping in my calves and leg areas and had to wait them out periodically for about 30 seconds each through the finish. Wasn’t pretty, but I did it.”

Donohue, who raised funds for the Hopkinton Center for the Arts and hosted the Newton-Wellesley Hospital charity team at her house on race morning, said she plans to return, with hopes of improving on her time of 4 hours, 43 minutes.

“I would absolutely love to run again,” she said. “There is no finish line in this race or life in general. It’s a dream that keeps giving — an admirable goal for mind, body and spirit. Whatever a person’s interests, I usually encourage my family and others to define your stretch goals and go for it — as crazy as they may seem. It can be done and makes life fun.”

Todd Snyder took his time in completing his first Boston, crossing the line in 6 hours, 10 minutes.

“I am satisfied with finishing the race,” he said. “I purposely did not run my pacer. I wanted to soak in the race, and I enjoyed every single step.”

Added Snyder: “It was a wonderful experience. There were people out and cheering essentially the entire 26.2-mile route and cheering as if I were in the lead. It was an experience I will remember for the rest of my life.”

Snyder, who initially started training for the race five years ago but was twice derailed due to bouts with cancer, said he has no plans to run again next year, although he might eventually take another shot at it to prove that he can run a faster time.

“I know I can do better — perhaps that is the seed for a future run,” he said. “For now, I am savoring my finish and my goal achieved!”