by Hopkinton Independent | May 1, 2019 | Education, Featured 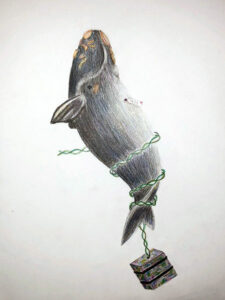 The Healthy Whale, Healthy Ocean Challenge invited K-12 students from the New England and Gulf of Maine regions in the United States and Canada to use their creative voices to highlight the critically endangered North Atlantic right whales and the need for conservation of marine ecosystems and resources. More than 130 participants created visual art, poetry and short films that celebrated the iconic right whales and drove action for their protection. Their submissions emphasized the beauty of the animals and called attention to the many threats they face, including ship strikes, entanglements and pollution.

“North Atlantic right whales are in danger of becoming extinct within our lifetime,” said Dr. Priscilla Brooks, director of ocean conservation at CLF. “The contest has been so important in raising awareness of this critical issue and creating a new generation of young advocates who will fight for the protection of right whales and our oceans.”

In her reflection about her piece, Robertson said her research gave her a better understanding of the direct relationship between humans and endangered species and added that she was “inspired to spread awareness.”

“I created this colored-pencil drawing and titled the piece ‘Imprisoned by Plastic’ because the seaweed chain and condensed plastic cube that weigh down the North Atlantic right whale mimic the old-fashioned prison punishment of wearing a ball and chain to prevent any escape,” Roberston explained. “Finally, I purposefully decided to leave the background blank to symbolize the uncertainty and ambiguity of the future of the North Atlantic right whale, which will hopefully be positive.”

The challenge winners and participants will be recognized on May 5 at an awards ceremony during the Right Whale Festival at the New England Aquarium. This community event will feature a student art exhibit, film screenings, presentations by youth conservation leaders, and a panel discussion moderated by Skerry. In addition, the participants’ pieces will be an important part of an ongoing campaign to inspire awareness, care, and action for right whales and our ocean, which will include future events and art exhibitions.

“We were so impressed by Jillian’s creative and compelling work, as well as those of all the challenge participants,” said Alyssa Irizarry, executive director of Bow Seat. “Even more inspiring is that, after taking part in the contest, many students vowed to be ocean-conscious citizens by continuing to educate themselves on the issue; spreading awareness; and making changes in their daily actions, such as limiting their plastic use. Their commitment and compassion give us hope for the future of our blue planet.”