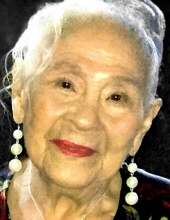 Lydia Medal, 92, of Franklin and a former longtime resident of Milford, passed away on March 26 at home with her family by her side. She was the wife of the late Jose “Cheo” Perez Silva, who died on March 16, 2008.

Mrs. Medal was born Sept. 16, 1928, in Mayaguez, Puerto Rico, the daughter of the late Fructuoso and Margarita Medal Anglero. She lived in her native Puerto Rico for 60 years before moving to Milford many years ago. She was a member of Renewed Life Church in Woonsocket, Rhode Island.

She is survived by three sons, Miguel A. Perez of Woonsocket, and Angel L. Perez and Nelson Rios-Medal, both of Puerto Rico; nine daughters, Elsie Rios of Puerto Rico, Claudia Perez and Ana Ramos, both of Woonsocket, Rosa L. Perez and Isabel Rodriguez, both of Florida, Natividad Gonzalez and Marcola Hernandez, both of Franklin, Virginia Santana of Hopkinton and Esther Ortiz of Worcester; over 107 grandchildren and great-grandchildren, and many nieces and nephews. She was predeceased by a son, Samuel Perez, a sister, Graciela Delgado, and a grandson, Miguel Perez, Jr.

Visiting hours will be held Friday April 2, from 9:30-11 a.m. in the Buma-Sargeant Funeral Home, 42 Congress St., Milford, with a graveside service to follow at 11:30 a.m. in Vernon Grove Cemetery, Milford.