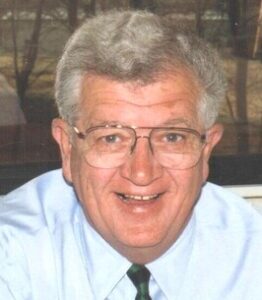 It is with much sadness that we announce the passing of James Joseph Rice Jr. on March 25.

Jim was the beloved husband of Bonnie (Barber) Rice for 57 years. He was the father of James Joseph Rice III of Hartford, Daniel Rice of Miami, and Kathleen (Rice) Fraser and her husband, Scott, of Hopkinton, and Papa to their children, Morgan Elizabeth and Courtney Grace, who were the light of his life. He also leaves his sister, Mary Louise Weidl of Niantic, Connecticut, his sister-in-law, Janice Mastropasqua and her husband, Frank, of East Hartford, Connecticut, and many cousins, nieces and nephews.

Jim’s health declined in the last few years and he fought a valiant battle. He always had a smile, a brilliant mind and a witty comment, with Bonnie always by his side until the very end.

Jim was born in Hartford on Dec. 3, 1934, to the late Agnes (Hickey) Rice and James Joseph Rice Sr. His family moved to Forest Hills, Queens, New York City, when he was an infant and returned to Hartford when he was 8 years old. He attended St. Augustine Grammar School, Bulkeley High School (Class of 1954) and the University of Connecticut. He was a survivor of the tragic Hartford Circus Fire of July 6, 1944.

He started to work with the Department of Transportation (DOT) in the summer of 1953, cutting grass with a scythe. He progressed through the ranks of the DOT by way of Merit System examinations to junior engineer, senior engineer and chief of DOT’s Traffic Division. In May 1983, he was appointed deputy commissioner of DOT’s Bureau of Aeronautics and was in charge of Bradley Airport’s modernization program. He received the state’s Manager of the Year award for his efforts at Bradley Airport. In June of 1987, he was appointed Deputy Commissioner of DOT’s Bureau of Highways and oversaw Governor William O’Neill’s $7 billion Infrastructure Renewal Program until his retirement on May 1, 1991. That same month he went to work with Parsons Brinkerhoff, one of the largest, most highly respected engineering firms in the country. As Connecticut’s area manager, he was responsible for securing many multi-million-dollar contracts for Parsons. He retired from Parsons on Oct. 1, 2004, culminating 51 years of service in the transportation industry. He was known as a firm, decisive administrator who strived to get things done.

Jim served honorably in the United States Army for two years. After basic training and radio code training at Fort Knox, Kentucky, he was stationed in Washington, D.C., for three months before going overseas, where he was assigned to the 196th Station Hospital, which at the time was part of the famous American Hospital of Paris. Both his sons followed his leadership to serve our nation and joined the military — Jim in the Marine Corps and Dan in the Army.

Jim and Bonnie loved to travel and they enjoyed many trips to various countries in Europe, the Middle East and the Caribbean with their dear friends, Karen and Mike Boyle, George and Bonnie Emmanuel, Mike and Stephanie Heneghan and Carol and Jon Bayer. Jim loved sports and was an avid New York Yankees and UConn basketball fan. He enjoyed playing golf, although admittedly he wasn’t very good. He did have a hole-in-one on the third hole at Tallwood Country Club in Hebron in 1999. He was a member of the Wethersfield Country Club, where he scored an incredible double eagle on a par 5, that he credited to the tailwind from a hurricane coming up the coast.

Jim was active in Rocky Hill civic and youth programs for many years. He coached Little League baseball (the Cadets) and PAL basketball and was a former member of the Democratic Town Committee, served on a Charter Revision Commission, was the citizen representative on a selection panel for town manager and was chairman of the Design Review Advisory Board.

Jim was a very patriotic man who loved his country and state and was proud of his Irish heritage. Above all he loved his wife, children and his cherished granddaughters. He was an amazing man and will be greatly missed. The family would like to thank Janine Wilcox, Gwen Jeffrey and Colleen Goeben for their compassion and kindness in the last few months.