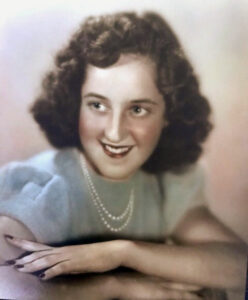 Madeleine Frances McBride, 94, of Hopkinton, passed away peacefully on June 11 at the Soldiers’ Home in Holyoke.

Madeleine, known as “Babe” to friends and family, was born and raised on Grove Street in Hopkinton. She was one of the first students to attend Center School when it opened, and was a graduate of Hopkinton High School. Babe earned her B.S. and became a registered nurse while living in Florida. She served in the Korean War as a flight nurse for the U.S. Air Force, was promoted to captain and was called back to active duty during the Berlin Crisis. She spent several years doing private duty nursing in Miami before returning to Hopkinton in the 1980s to help care for her parents, Frank and Madeleine McBride. She is survived by her brother, Richard “Mike” McBride of Hopkinton and several nieces and nephews. She was predeceased by her parents and her brother Paul, of Hopkinton.

Madeleine enjoyed living at Golden Pond in Hopkinton for several years before moving to the Soldiers’ Home in 2017, where she was cared for with dignity and respect.

A graveside memorial service with military honors was held July 12 at Mount Auburn Cemetery in Hopkinton. Arrangements were under the care of the Chesmore Funeral Home of Hopkinton (ChesmoreFuneralHome.com). In lieu of flowers, donations can be made in her name to the Soldiers’ Home in Holyoke, 110 Cherry St., Holyoke, MA 01040.