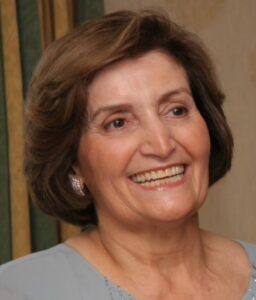 María “Rita” (Stiefel) Eguía, 80, of Hopkinton passed away on May 13 at home surrounded by her adoring family. Born in Pascanas (Córdoba), Argentina, she was the daughter of the late María Rita (Castellano) and Otto Stiefel. She was the wife of 54 years to José María Eguía, M.D.

In Argentina, Rita obtained her master’s in Spanish literature, taught in high school and worked at the Catholic University of Córdoba. She came to the United States in 1969 at the age of 26 with her husband and oldest daughter. Her son and younger daughter were born in Dallas and Norwood, respectively. Cheshire, Connecticut, was her home for 43 years, until she moved in January this year to Hopkinton. She was a devoted parishioner of St. Bridget’s Church in Cheshire. She always missed her large family, her husband’s family, and good friends in Cordoba, Argentina, but came to see the U.S. as her home, which was eased immensely by her close circle of Argentine-American and other family friends. She was an adjunct professor of Spanish for 14 years at Southern Connecticut State University and Gateway Community College in New Haven. Upon retirement, Rita enjoyed volunteering at Recording for the Blind and Dyslexic and Cheshire Food Pantry, both in Connecticut. Rita immensely enjoyed traveling the world with her husband, children and extended family from Spain and Argentina. She had a humble and generous spirit, and visitors to her home often left with multiple bags of groceries or housewares.

Besides her husband, she is survived by three children, María Eguía-Brusco and Sam Brusco of Cranston, Rhode Island; José Eguía, Jr. and John Brown of San Francisco; and Cecilia and Mark Kelly, of Hopkinton. In addition, she was “Aba” (abuela) to four loving grandchildren, James and Raymond Brusco, and Caroline and Lauren Kelly, as well as a granddog, Phoebe, whom she tolerated from a distance; this was a big step for her. She also leaves behind two sisters, Luisa Gorrochategui and Beatriz Becerra, both of Córdoba, Argentina. She is predeceased by four sisters and two brothers, Teresa Pizarro, Raúl Stiefel, Susana Torres, Noemí Orías, Otto Stiefel and María Eugenia Casella. She was a mother to many other Argentines who came to the US; most recently, her “pollitos” included Marcelo Orías, Fernando Orías, Josefina Stiefel and José García. She was also very proud of and dearly loved by all her godchildren.

Visitation will be held on Monday, May 16, from 4-7 p.m. at the Chesmore Funeral Home of Hopkinton, 57 Hayden Rowe Street. A funeral Mass will be celebrated on Tuesday, May 17, at 11 a.m. at Saint John the Evangelist Church, 20 Church Street, Hopkinton. Interment will be held at a later date. In lieu of flowers, donations may be made to Cheshire Food Pantry, 175 Sandbank Road, Cheshire, CT 06410 or cheshirefoodpantry.org.