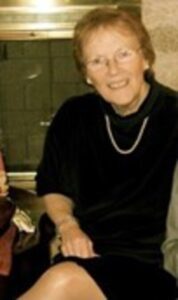 Marilyn M. “Mandy” (Moore) Heavey of Danvers, formerly of Natick, passed away on June 10 after a long battle with Alzheimer’s disease. Born in San Diego on June 11, 1938, Mandy lived in many places as her family moved with her Navy father from base to base, including Japan, Alaska, Texas, California and Florida. Mandy lived many years in Natick and was an active member of the community, including as a CCD teacher for multiple years.

Mandy received a B.S. degree with a major in mathematics and a minor in microbiology from Texas Tech and was involved in technology at a very early time. She was thought of as a pioneer in women breaking technology companies’ glass ceilings as she gained more and more responsibility. She started out as a software programmer for the Navy Tactical Data System. Over the years she held positions from individual contributor to senior management in software development, engineering, software applications, operations, information technology, mergers and acquisitions, and program management for many types of products/services companies including Becton-Dickinson, Prime Computer, Apollo Computer, BeFree and Hewlett-Packard.

In addition to her career accomplishments, Mandy was known to many for her kind and caring personality and love of practical jokes. She was always asking how could she help and what did people need, and was involved in the community to support local causes. Also, there was never an April Fool’s Day that passed by that she didn’t “fool” someone with a practical joke that would have her laughing for hours.

Mandy is survived by her three children and their spouses — son Blair Heavey and wife Nicolette of Ipswich, Dennis Heavey and wife Andrea of Hopkinton, and daughter Le Chaney and husband Keith of North Andover. She also was beloved and known as “Grandy” to her grandchildren, Ryan, Kelsey, Devon, Brent, Kyle, Anna, Carter and Nina, about whom she glowingly talked. She also is survived by her brother, Ben Moore III (“Mike”) and his wife, Cynthia, of Manlius, New York, and her cousin, Helen Deane Bennett of Winston-Salem, North Carolina.

Relatives and friends are invited to attend a Funeral Mass on Saturday, June 19, at 10:30 a.m. in St. John the Evangelist Church, 20 Church St., Hopkinton, followed by a reception and celebration of Mandy’s life. In lieu of flowers, the family asks that donations be made in Mandy’s name to the local Alzheimer’s Association, 309 Waverly Road, Waltham, MA 02452, (act.alz.org/donate). Funeral arrangements are under the direction of the George L. Doherty Funeral Service, Somerville (dohertyfuneralservice.com).