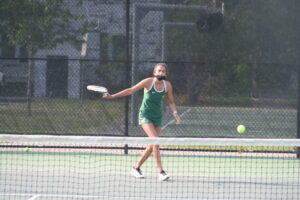 Senior Maya Storm plays No. 1 singles for the Hillers, who were battling for one of the top spots in the Tri-Valley League as the regular season came to a close this week. PHOTO/JERRY SPAR

“Quality over quantity.” That has been the motto of the Hopkinton High School girls tennis team this spring. In the program’s first season since 2019, the Hillers have just eight players on the team, including six returners and two newcomers.

But that has not stopped HHS from ranking among the top teams in the Tri-Valley League. Following a dramatic 3-2 win over a previously unbeaten Medfield team on June 7, Hopkinton’s record stood at 10-2 and the team was on track to finish second in a conference replete with powerhouse programs.

“Our team is unusually small, but I told them after the tryouts that I don’t ever have a number in mind for how large our roster should be,” said fifth-year coach Lyn Calkins. “For me, quality is more important than quantity, and that’s how we have been approaching this season.”

Calkins knew the rematch with Medfield would be tight after the Hillers fell to their rival earlier in the year. Hopkinton received wins from No. 2 singles player Maddy LaMachia, who avenged an earlier defeat, and undefeated third singles player Riley Krattenmaker.

The match came down to the first doubles competition, with seniors Sophie Kaplan and Vani Sharma outlasting their opponents 4-6, 7-6, 6-2 on a sweltering June day.

“All through the season, we were working towards beating our toughest competitors, and certainly Medfield and Dover-Sherborn and Westwood are really tough rivals,” Calkins said. “Each one of the girls has improved so much since last month. The girls were really motivated and each of them had something they wanted to improve upon from early in the season.”

What Hopkinton lacks in depth, it has more than made up for in talent. Senior Maya Storm has posted a record over .500 from the top singles spot despite being matched up against the best players in the league every single match. LaMachia posted a 9-3 record through the first dozen matches and Krattenmaker, a junior, improved to a perfect 12-0 after the Medfield match.

The top doubles team of Kaplan and Sharma had lost just twice this season. The No. 2 doubles team has been anchored by junior Victoria Allen along with a rotation between freshman Romy Zinman and sophomore Hailey Kessler.

The Hillers will close out the regular season having played a total of 15 matches ahead of the planned state tournament. Unlikely most seasons, there will be no individual postseason competition this spring and instead there will only be a team tournament.

Calkins said it was challenging at first to get the players back up to speed after missing all of last year. But having a smaller team came with the added benefit of being able to get everyone significant playing time and practice opportunities, which sped up the process.

“I think it was a little bit slow starting out, but after the first few weeks of practice we definitely started to improve,” the coach said. “It just became more clear what our goals were going to be this season.”

One of the most significant goals was achieved the first time the Hillers stepped on the court after losing out on 2020 due to the pandemic.

“We are just so grateful to be back playing tennis and being able to compete again,” Calkins said.