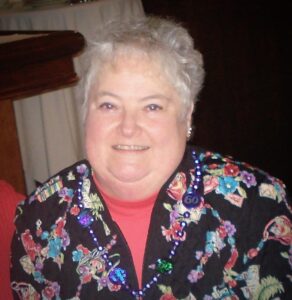 Maureen E. Ferguson, 72, of Holliston died July 21 after a prolonged illness. Born in Boston, she was the daughter of the late Cornelius P. and Mary E. (Linehan) O’Brien.

Maureen graduated from Brighton High School and Boston City College and ultimately earned her Master of Arts degree in English from the University of Michigan. After university, she became an English teacher and she taught her love of the written word to children in Waltham and in Hopkinton for over 35 years. Maureen was a fierce and passionate educator, known for her fiery style and wit. She retired to her home on Cape Cod in 2009.

She was the loving mother to Ryan and his wife, Tanya Ferguson, and an adoring nana to her two grandchildren, Andrew (9) and Elise (7). Above all else, Maureen loved her family. She cherished family time playing card games, making ice cream sundaes and having cookouts on the deck of her home in Falmouth. She is survived and mourned by several cousins and friends whom she considered to be her closest family.

Interment will be held privately. A mass in Maureen’s name will be said at 9 a.m. on Friday, August 28, at St. Mary’s Church of Holliston. In lieu of flowers donations in her memory may be made to the National Kidney Foundation at kidney.org/support. Arrangements are under the care of the Chesmore Funeral Home of Holliston.