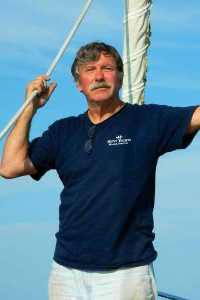 Michael Francis Parnell, 67, of Hopkinton died July 3 at Brigham & Women’s Hospital in Boston after a brief illness. He was the husband of Maureen E. (Davis) Parnell for the past three years.

Born in Chelsea on Nov. 29, 1953, the son of Donald Parnell of Holliston and the late Theresa (Mahoney ) Parnell, Mr. Parnell was raised in Somerville and Holliston and had lived in Hopkinton for the past 30 years.

Michael had been a heavy equipment operator for First Colony Development for several years. He previously had worked for Certified Sales as a large marine transport hauler, and for Elmwood Farms Food for the Needy program.

Michael loved to take cruises, to go camping, the New England Patriots and hosting many Super Bowl parties for friends and family.

Anyone who knew him would say he could fix anything. He spent the last 30 years building and remodeling his dream home, mostly by himself and with the occasional call for an extra hand from his brothers, sons and close friends.

In addition to his wife and father, he is survived by his children, Kristi Baldini of Bangor, Maine, and Jason Parnell of Whitinsville. He was the father of the late Justin Parnell.

He was the stepfather of Danielle Partlow and Geoff of Upton, and Eric Spellman of Bellingham.

He also is survived by his siblings, Gary Parnell of Webster, Kathy Trombly of Peterboro, New Hampshire, Nancy Askins of Orleans, Kevin Parnell, and Stephen Parnell of Holliston.

He also is survived by his grandchildren, Michael, Abby, Rylin, Mason, Connor, Luke, Hayden and Jacob.

Mike was truly loved by all of the Davis family.

His calling hours will be held on Thursday, July 8, in the Ginley Crowley Funeral Home, 3 Barber St., Medway, from 4-7 p.m. Services will be private.

In lieu of flowers, donations may be made in his memory to the Hopkinton Food Pantry, 109 South St., Hopkinton, MA 01748.