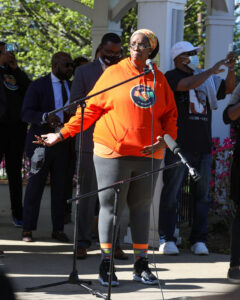 Monica Cannon-Grant speaks to the crowd at the Mikayla Miller rally at Hopkinton Town Common on May 6, 2021. PHOTO/JOHN CARDILLO

Boston activist Monica Cannon-Grant, who led a rally at Hopkinton Town Common last May following the death of teenager Mikayla Miller, was arrested Tuesday and indicted on charges that she and her husband defrauded donors to her nonprofit, Violence in Boston.

Cannon-Grant and Clark Grant stand accused of using donations for personal expenses and hiding their actions from other members of the organization.

Cannon-Grant was critical of the investigation into Miller’s death and called for the resignation of Middlesex District Attorney Marian Ryan, whose office determined the death to be a suicide. Cannon-Grant raised funds to cover an independent autopsy for Miller, although those results have yet to be released or discussed publicly.