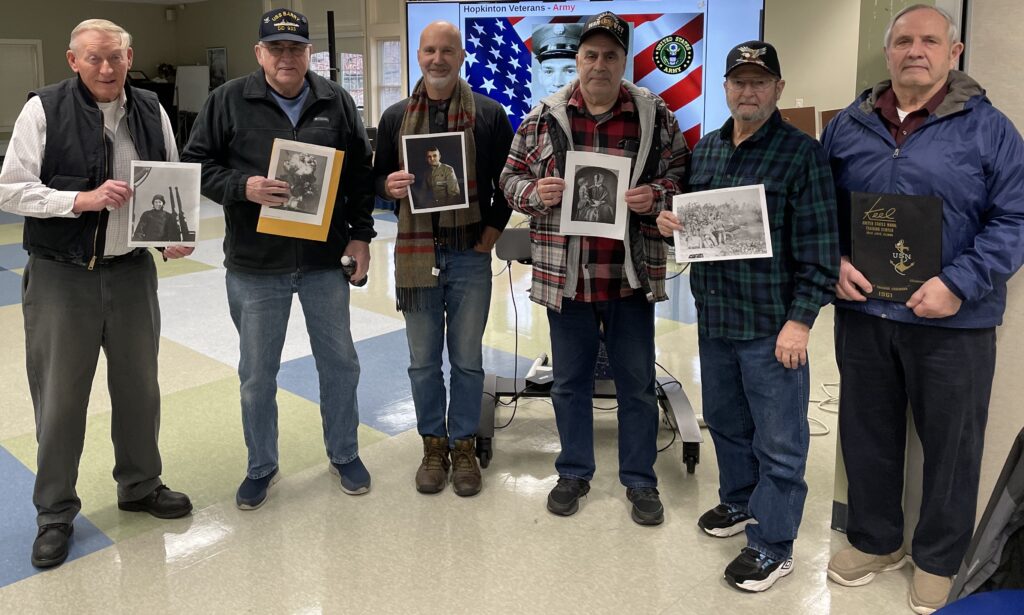 Among the veterans at the Jan. 6 gathering were (from left) Robert Hole (Navy), with a 1942 photo of Bob Feller standing at his anti-aircraft gun mount on the USS Alabama (BB-60); Bill Hamilton (Navy), with a dynamic view of the USS Columbia being hit by enemy fire; Ted Hoyt (Army), displaying a view of Brigadier Gen. Frank D. Merrill; Mike Arakelian (Air Force), holding an image of the wife and son of President Franklin Pierce;  Bob Letendre (Army), demonstrating a pack howitzer placement, which is well-known to Hopkinton veterans through the experiences of Richard Brault; and Art Brooks (Navy), holding a copy of his ship’s yearbook from the time in the Pacific just prior to the buildup of the Vietnam conflict.

The Jan. 6 Veterans Breakfast was highlighted by inclement weather that was braved by dozens of local veterans. Usual discussions nevertheless proceeded, along with a delicious meal provided by an anonymous donor and prepared by the Senior Center staff.

Military events that occurred on or about Jan. 6 were the main theme.

Among the highlights were discussions of Bob Feller, the first Baseball Hall of Fame member to volunteer for World War II combat; the light carrier USS Columbia (CL-56), which was hit by enemy fire near the Philippines, causing 13 to be killed and 44 wounded; Brigadier Gen. Frank D. Merrill, a Hopkinton native (his family relocated when he was a child) who was put in command of a volunteer unit that became known as “Merrill’s Marauders”; and President Franklin Pierce, whose 11-year-old son was killed in a railroad accident in Massachusetts shortly before Pierce’s inauguration in 1853. The Pierces lived in New Hampshire and had a summer home in Andover.