Patrick Nash, the new assistant principal at Hopkinton Middle School, believes that role has changed significantly over the years and said he is excited to take on the challenge.

“There’s a lot more to the assistant principal’s job [than handling discipline], and a lot of moving parts to it,” he noted.

Speaking to the Hopkinton Independent on his first day on the job in late July, Nash said HMS administrators will be dividing up tasks, but he sees the position focusing on instructional leadership, building and other types of management and communications.

Their paths in Westborough crossed before through various district initiatives and between grade levels, Nash said. 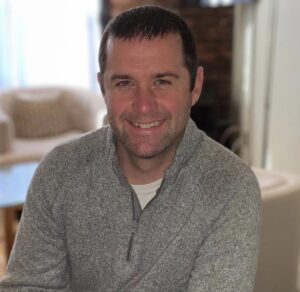 Patrick Nash moves over from Westborough to Hopkinton Middle School.

“I’m very familiar with Matt and he’s an excellent administrator. I’m happy to be working alongside him,” he noted.

In addition to his Westborough position, Nash taught mathematics and engineering in Foxborough Public Schools at the high school level for five years. He also worked as a special education teacher at Bi-County Collaborative for about 2 1/2 years.

In addition to his employment history, Nash said he thinks his ability to build relationships quickly, work through difficulties students may have and be a problem solver will serve him well on the job.

He also sees himself as an instructional leader and supporter of teachers.

Nash noted that the interview process included a remote screening, followed by interviews with multiple staff members and families and another with administrators.

“In Pat’s second round of interviews, which took place with central office personnel, Pat spoke about helping kids grow, if or when they make mistakes. He stressed a restorative, educative approach, which fits in perfectly with the values of the Hopkinton Public Schools,” Cavanaugh said.

For his part, Nash said that he was attracted to the Hopkinton district because of its “strong reputation in regards to academics, community and commitment to that.” He said administrators, faculty and families value education highly and it’s a good fit.

“Hopkinton is somewhere I feel I can contribute right away as well as grow at the same time and learn new pathways,” Nash said.

The superintendent added, “We were fortunate to find people to fill these roles [in the district] who come with extensive prior administrative experience. They’re going to hit the ground running.”

Nash received his bachelor’s of science from Bridgewater State University, majoring in accounting and finance and minoring in mathematics and actuarial science.

He earned his master of education from Endicott College in educational leadership.

The student population of sixth-, seventh- and eighth-graders at Hopkinton Middle School totals more than 900; Nash’s prior school has 600 students in Grades 7 and 8. It is an age group that Nash enjoys.

“I’ve been able to connect with that age group over the years,” he said. “Students are really trying to figure themselves out. It can be an exciting but hard time for them. … I hope to build relationships and help them navigate situations as well as bring light and fun to it.”

During these initial weeks, Nash wants to get to know the school and district culture and build an understanding of the community so everyone can have “great expectations for a good school year.”

A Wrentham resident, Nash and his wife have two daughters, one who is 2 and the other who is 5 months. In his spare time, he enjoys running and “reading a lot of books.”