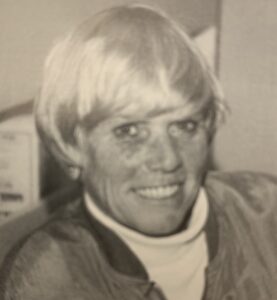 In a recent story on Hopkinton High School’s new athletic director, Kiely Murray, we referred to her as the second female AD in school history, after Dee King. We neglected to mention Sue Beavers, who served in the role for a few years in the mid-1990s.

Prior to becoming AD, Beavers coached multiple sports at the school — far more than she planned.

Beavers, who also taught physical education and health at HHS, applied for the AD job when it came open and she was “ready for a change.”

“I’ve coached everything, and I think I have some good ideas,” she recalled thinking.

When she was selected, she was one of two female ADs in the Tri-Valley League (along with Kathy Egy of Millis).

“When I’d go to the athletic directors meetings, there were about 20 [female ADs] in the state,” she remembered. “The good thing was you could use the ladies’ room without waiting in line.”

Beavers served as athletic director during a time when sports were being added, especially for girls, which pleased her. The problem, however, is that her hours increased as well, and the AD position was not full-time. She was still teaching, and then she would work nights and weekends to make sure she was a constant presence at the games.

“I wanted to leave the coaching to the coaches and I’ll take care of the spectators,” she said.

After a few years, Beavers left the AD position and returned to coaching (and continued teaching) before eventually retiring in 2004.

In 2016 she was inducted into the HHS Athletics Hall of Fame. A 1965 HHS graduate, she played soccer and basketball — the only two sports offered for girls at the time. She was recognized for her exploits as a player, coach and athletic director.

She remains active by playing golf and walking with a group of friends. One activity she has not continued is attending HHS games.

“When I walked away, at first I knew I’d get a little emotional if I went, so I stayed away,” she said. “Then I just got used to not going anymore.”

The fallout continues from the Monica Cannon-Grant saga, as the community activist closed down her Violence in Boston nonprofit last month. Cannon-Grant and her husband, Clark Grant, have been accused of using donations to the organization for personal expenses, among numerous fraud and conspiracy charges.

The connection to Hopkinton, of course, comes as Cannon-Grant led the controversial rally/remembrance on the Town Common in the spring of 2021 following the death of Hopkinton High School student Mikayla Miller.

Many in town resent Cannon-Grant for the accusations she and her followers levied, suggesting that Miller’s death was not the result of suicide but rather a murder that was covered up by local and state authorities. They pointed to an altercation a few hours before Miller’s death between Miller, who was Black and gay, and a group of teenagers that included her former girlfriend.

Count Hopkinton Police Deputy Chief John Porter among those who does not have much sympathy for Cannon-Grant.

“Mikayla Miller was a mental health crisis,” Porter said. “Even the night of [her death], we spoke with our clinician, we offered clinical help to the family. The mother didn’t want it, the mother felt confident that she could handle it and she was going to make sure there was a followup. The clinicians, the school counselors and the [school resource officers] were aware of the incident and they were already aware of Mikayla, and the school had been working hard to help her.

“Unfortunately what happened was an individual not from our community felt that she could take advantage of the crisis and turn it into something that it wasn’t. It was always a tragedy. Our department always looks at something like that and wonders if we could have done something more for her. The officers who responded the night of the domestic [incident] did everything that they were supposed to do and were trained to do, but you’re always going to wonder, could I have done more to help prevent this?

Congratulations to Ailene Barry and Ellora Hoyt, who recently earned their Girl Scouts Gold Award, the highest achievement a Girl Scout can earn. The award is available to girls in high school who create sustainable change on a community or world issue.

Barry’s project, titled “The Problem with the Textile Industry,” addresses the environmental impacts of fast fashion and its toxic system of overproduction and consumption that has made it one of the largest polluters in the world. The project consisted of educational pamphlets, workshops and presentations to educate the community. She was driven to influence future purchasing decisions, specifically for women ages 14-25 who typically buy a lot of “fast fashion” clothing.

Hoyt worked toward changing the way religious education classrooms run with her project, “Keeping Religion Important and Close to Our Everyday Lives.” She created prayer cloths and a Mary tablecloth, then placed objects into use around the religious education classrooms and main hall so students, parishioners and teachers would have a greater respect for their holy community.