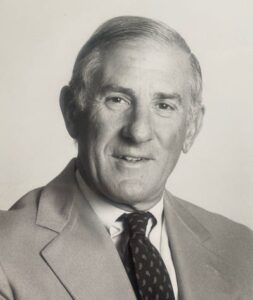 Norman J. Shachoy of Mattapoisett died peacefully in his home surrounded by family on Feb. 7. His life was filled with his great loves — his wife and family, his work and the sea. Norm and Maryellen (Sullivan) met as teenagers in Mattapoisett and recently celebrated their 60th wedding anniversary. They lived in and around Boston for most of their lives except when Norm’s work took them to London in the 1970s. They spent all their summers on Buzzards Bay and in Mattapoisett and Marion, where they moved when Norm retired.

Norman attended Monsignor James Coyle High School in Taunton and studied engineering at Villanova University. After completing his undergraduate degree, Villanova Law School offered him a full scholarship that changed the course of his life. After law school, Norm joined Bingham Dana & Gould in Boston, where he practiced for 40 years. He advised many businesses, large and small, and represented major financial institutions, locally and internationally.

Maryellen introduced Norm to sailing on Buzzards Bay and it became his passion. His happiest times were spent on the water with family and friends. As a couple, they cruised from Canada to the Caribbean, putting thousands of miles under their sloop, Volunteer. Racing to Bermuda eight times with family and friends as crew was his life’s big adventure. Smoking cigars, drinking rum and swapping sea stories with his devoted crew brought him great joy.

Norman was predeceased by his parents, Clifford and Mary, and his brother, Paul. In addition to his wife, Maryellen, he leaves his sisters, Elaine Valovic of Hopkinton and Diane Trainor of Sebastian, Florida; his son Jamey and wife Laura Ryan and their children, Katherine, Ben and Patrick; and his son Christopher and wife Meredith Clark and their children, Brooke, Reed and Conrad.

Norm’s family is extremely grateful for the love and care he received at Bridges and from his incredible home caregivers who kept him smiling and comfortable at home. Donations in his honor can be made to UMass Law School, 333 Faunce Corner Road, Dartmouth, MA 02747.  Funeral services will be private. Arrangements are by the Saunders-Dwyer Mattapoisett Home for Funerals.