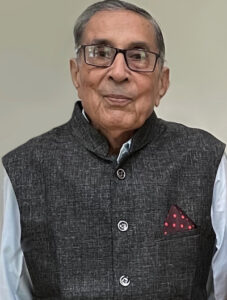 Odhavjibhai Arjan Parmar, 78, of Hopkinton passed away peacefully Jan. 20 at the Miriam Hospital in Providence, Rhode Island. He was the beloved husband of Shardaben Odhavjibhai Parmar.

Born Feb. 25, 1943, in Kundla Amreli, Gujarat, India, he was the son of the late Arjan Premjibhai Parmar and the late Bhaniben Arjan Parmar.

Raised and educated in India, Odhavjibhai worked for 35 years as a civil engineer and planning supervisor before retiring in 2001 and moving to the United States in April 2021.

A man of great faith and devotion, he was deeply committed to his cherished family.  Odhavjibhai was an avid reader and writer, having authored five religious books. He enjoyed entertaining — always serving the most wonderful food — and religious travel. He was proud of having been the only one of his more than 50 family members to have attended college. Odhavjibhai was humbled and honored to have served for many years as a community secretary in India.

In addition to his wife, Shardaben, he leaves his loving son, Harish O. Parmar and wife Madhavi Parmar of Hopkinton. He was the proud and adoring grandfather of Astha Parmar and Krutarth Parma, and was the dear brother of Kashi Jadav of Mumbai, India. He leaves several nieces and nephews, his extended family and many dear friends. Odhavjibhai was predeceased by three brothers and two sisters.