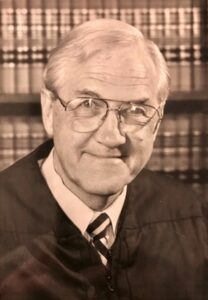 Born April 19, 1928, in Framingham, he was loved and respected by all who knew him, and his qualities were many: kind, generous, considerate, fair, wise, loving, hard-working, humble, devoted, collegial and diplomatic. He was a true public servant, and one of the greatest of the “Greatest Generation.” Judge Danahy was the first child of teenage parents, and grew up in Hopkinton. Living in a small town with a close-knit family during the Great Depression forever influenced his outlook on life, and his hometown always held a special place in his heart. He was the first in his family to attend college when he was accepted to Boston College.

Shortly thereafter, he accepted a basketball scholarship and transferred to the University of Tampa in 1948. When his scholarship ended, he worked his way  through college as a busboy at the legendary Valencia Gardens Restaurant, where he became a member of the Hotel and Restaurant Employees Union Local 104 (known as the “Spanish Waiters Union”). Judge Danahy later served on the board of trustees for the university (1975) and received the university’s distinguished alumnus medal (1978).

He was an avid reader and a prolific writer. In 2007, he  established the Danahy Fiction Prize, an annual award for short fiction published in the Tampa Review, the literary journal of the University of Tampa. He graduated with a B.A. in history in 1951. Later that same year, he married his college sweetheart, Georgia Reed, at Sacred Heart Church on Christmas Day. They recently celebrated their 70th wedding anniversary.

Judge Danahy served our country in two branches of the armed forces. He was honorably discharged three times: from the U.S. Marine Corps (corporal) and twice from the U.S. Army, both as a private (regular Army) and as a second lieutenant (military intelligence) following the Korean War. After his service, Judge Danahy attended the University of Florida College of Law, while Georgia obtained her master’s degree in education.

After he received his law degree in 1957, the couple returned to Tampa, where Judge Danahy entered  private practice. At that time there were fewer than 300 lawyers practicing in Hillsborough County — today there are well over 7,500. Ultimately, he formed the law firm of Danahy, Garcia and Fields. He was a member of both the Florida and Hillsborough County Bar Associations for 64 years. He served in all three branches of Florida government. He was an assistant Florida attorney general (1957), he served as a member of the Florida House of Representatives (1966-74), and he was a judge for over 33 years.

Judge Danahy believed  that service as a judge is the “highest public service to which a lawyer can aspire.” In 1975 he was appointed the Circuit Court of the Thirteenth Judicial Circuit by Gov. Ruben Askew. He was elected to a full term in 1976. In 1977 Governor Askew appointed him to the Second District Court of Appeal. He was retained in office in the general elections of 1978, 1984, 1990 and 1996. He served as the chief judge of the court from 1986-88, and also served as an associate judge on the Fourth and Fifth District Courts of Appeal.

When he “constitutionally retired” from the Second District Court of Appeal on April 19, 1998, at age 70, his 21-year tenure was the longest of any judge to serve on the court to that date. Following his retirement, he continued to serve on the court as a senior judge, and the largest, centrally located and most used conference room was dedicated as the Paul W. Danahy Jr. Conference Room in 2006. He hung up his robe for good in 2008 at the age of 80.

Beginning in 2009, Judge Danahy became of counsel to his son Matt’s law firm, and served on the Development Counsel for Bay Area Legal Services up until the time of his death. To mark the occasion of his 90th birthday, Hon. Kathy Castor read a congressional proclamation in his honor in the well of the U.S. House of Representatives on April 23, 2018.