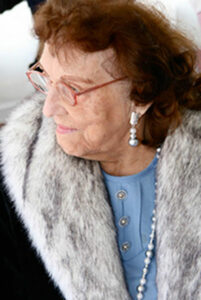 Pauline M. Hutchinson, 96, of Hopkinton passed away Nov. 26. Born in Peterborough, New Hampshire, she was the daughter of the late Marguerite Bedell and Donald S. Greene.

A resident of Hopkinton for 57 years, Pauline regularly worked two jobs to support her children, grandchildren and so many others in the community around her. She took pleasure in housing Boston Marathoners over the years and was known for waving and smiling at all the runners in her most elegant attire from her doorway on Hayden Rowe Street. She was a fantastic gardener and storyteller and had a personal style that was second to none. She believed in an “open door” policy to all children, veterans and any other humans or animals in need. She took care of people until she was 88 years old, providing home care to a trio of sisters in their 90s. She was affectionately called Nana by almost anyone she met, and she loved that.

She is survived by her children, Sharon of Milford, and Michael and his wife, Rachel, of Upton; her siblings, Shirley, John and Bob; four grandchildren, John, Kaylyn, Michael and Randle Rae; two great-grandchildren, Zachary and Aniken Hutchinson; as well as her late daughter Cheryl’s longtime partner, Bill McGrath, and granddaughter Cassie-Leigh’s best friend and partner for life, James Stewart. She is predeceased by two children, Roland who passed away at the age of 21, and Cheryl Ann, who passed July 23, 2019, her siblings, Jigs, Bernard and Bette, and her granddaughter, Cassie-Leigh, who passed July 15, 2019. Nana knew she would be seeing them all and so many friends again.

A funeral mass was held Dec. 4 at St. John the Evangelist Church of Hopkinton, followed by burial in Evergreen Cemetery in Hopkinton. Funeral services were under the care of the Chesmore Funeral Home (chesmorefuneralhome.com). In lieu of flowers, donations may be made to the National League of POW/MIA Families: pow-miafamilies.org.