Peace Canvas a symbol of support for local Islamic community 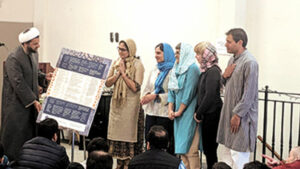 The South Asian Circle of Hopkinton presented the Islamic Masumeen Center of New England with a Peace Canvas to show compassion and support following the March attack on a mosque in New Zealand.

One Hopkinton organization is reaching out in “love and support” of another as targeted violence around the globe leaves many shaken.

After an attack on a mosque in New Zealand on March 15 left 50 people dead and dozens more injured, members of the South Asian Circle of Hopkinton (SACH) quickly reached out to their friends and neighbors of the Islamic community to show that they stood in solidarity in honoring the victims of the horrific tragedy.

SACH is a nonprofit organization founded in September of 2018 with a mission to “bring together the collective strength, celebrate the culture and share the vibrant spirit of the South Asian diaspora of Hopkinton.”

“Where we came from in South Asia, there were physical and political barriers and we didn’t have the opportunity to learn more about each other,” outreach chair Charusmitha Ram, a native of India, explained. “Here, we wanted to bring all of the families together to help each other, pull in resources and collective strengths, and give back to the community.”

Seeing that one of the ways to give back to their community was to reach out to neighbors, the SACH started with organizing a prayer ritual for the victims of the New Zealand mosque attack. That idea blossomed into a more tangible way for the community at large to show support for the Islamic community of Hopkinton.

“We decided to present the Islamic community with something symbolic to let them know we were standing with them in support,” Ram said.

After gathering messages of peace from more than 30 residents of Hopkinton from different backgrounds and faiths, the SACH created a Peace Canvas, a large canvas with quotes on patches of varying shades of blue, made to look like a prayer mat.

“We are all one, in our community, in our celebrations and in our sadness. Let us hope that by standing strong together, we will overcome the evil that tries to tear us apart,” reads one message of support on the Peace Canvas.

“We stand with the Islamic community of Hopkinton. Your presence enriches our towns, and we are so glad to have you as part of our shared community,” reads another.

The Peace Canvas was presented to the members of the Islamic Masumeen Center of New England on Wood Street during a “moving” event that brought people of different cultures and religions together under one roof.

“It was very unexpected that they reached out to us. It really touched us,” said Amman Haidri, outreach director of the Islamic Masumeen Center.

According to Haidri, Islamic Masumeen Center members were very moved that SACH though to give them comfort during a time of sadness, and have hung the Peace Canvas in a prominent location “for people to see we are all connected.”

The Center has been a place of worship in Hopkinton for the past 20 years, in a town that has been very welcoming to people of all cultures and religions, according to Agha Mehdi, the center’s imam.

“This compassionate gesture reiterates the values this country stands for,” he said. “This neighborhood is very accepting and embracing of other faiths.”

As the Muslim community has struggled with prejudice throughout the world due to the actions of extremists, this small expression of compassion has meant a great deal to many in Hopkinton.

“It was a gesture of mutual respect and love,” Mehdi said. “It was heartwarming to see the community reach out with comfort and support.” 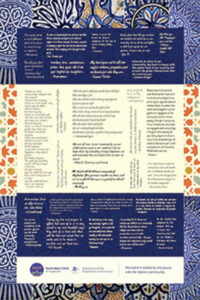 The Peace Canvas is inscribed with quotes from Hopkinton residents and others encouraging understanding and unity.