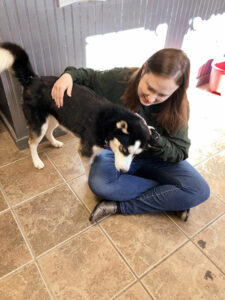 Beth Watson has devoted much of her free time to caring for cats and dogs at Baypath Humane Society.

Editor’s note: This is a feature in the Independent called “Hopkinton High-Five” where we salute a resident who has made contributions to the community. 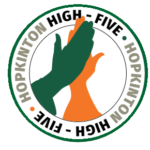 Finding forever homes for cats and dogs without one is a passion that has followed Beth Watson wherever she goes.

Watson has spent 25 years working with animals, including 20 years working with cats at a county humane society in Atlanta before relocating to Hopkinton three years ago. An immediate priority for her when she moved to town was to volunteer with Baypath Humane Society of Hopkinton.

“I just have always my whole life liked animals,” Watson said. “When I came here, sort of the obvious idea for me was to go to Baypath and volunteer there.”

While Watson enjoys working with both dogs and cats, she has a special place in her heart for her feline friends. Watson is a part of Baypath’s Kitty’s Gone Friendly program, which works with cats that are shy and often terrified and have behavioral issues.

“I’ve always kind of been a cat person,” she said. “I like the complicated personalities that cats have.”

Watson and her fellow Kitty’s Gone Friendly volunteers spend a lot of extra time working with the timid cats, earning their trust and helping to prepare them for re-entry into a healthy home environment.

“You learn a lot of patience,” she said. “To see them completely turn around and get adopted into homes where they can have a wonderful, successful life and not be afraid anymore is really nice.”

“A lot of people don’t want to spend the time taking care of all the issues that come up when an animal gets old, and that’s hard to deal with,” said Watson, who takes particular joy in working with elderly cats.

The animals are well-loved once they come into Watson’s and Baypath’s care, but the backstories of how they got there can often be sorrowful.

Watson said she once helped find a new home for cats belonging to a woman who was on hospice care. Another time, she was able to re-house the animals of a person who had been murdered.

“What drains me the most is dealing with people who just don’t care about their animals, and that’s hard. You have to really focus on [the fact that] you’re there to help the animals firstly,” she said.

At home, Watson has four cats of her own — including one she adopted from Baypath last year — and a 100-pound rescue dog.

Watson’s personal zoo often includes foster animals that she brings home from Baypath. Normally one foster animal at a time is the rule, but she once brought home four Great Dane puppies for a couple of weeks.

“It was a completely insane thing to do, but I kind of did it because I thought it was crazy,” Watson said.

For someone who loves cats and animals as much as she does, letting go of the foster animals can be difficult.

But there is always a silver lining.

“It is hard to let go of a foster, but I knew my old foster was getting adopted and I was already thinking about the next cat I could help, which makes it easier,” Watson said. “[But] not for my kids. There’s been a few fosters that my kids wanted to keep, and my husband, and I’m like ‘No.’ ”

In her free time, Watson enjoys playing the video game “World of Warcraft” and studying genealogies.

Her fascination with history led her to obtain a master’s degree in historic preservation while living in Atlanta. She became involved with Hopkinton’s Historical Commission and District Commission and lives in a historic colonial house.

“I love history, and in Atlanta everything is new,” Watson said. “Three years now I’ve been in town and I still drive around and just love all of the architecture and the history that I see everywhere. So I just wanted to help preserve that.”