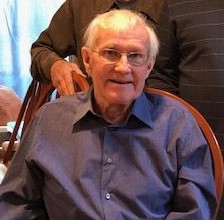 Peter Rowe Bacon, 78, of Hopkinton as well as Five Islands, Maine, passed away peacefully at Emerson Hospital in Concord on Dec. 8. Born in Waltham on July 30, 1942, he was the son of Francis Howard Bacon and Helen Margaret (Rowe) Bacon, who predeceased him. He grew up in Sudbury, graduating from Lincoln-Sudbury Regional High School in 1960.

Peter earned his Bachelor of Science degree and did advanced graduate work at Springfield College. While there he competed in soccer and gymnastics. After graduation he taught and coached gymnastics in Kings Park, New York, for several years, becoming director of physical education, K-12, for that school district. In 1972 he became director of physical education, K-8, for the Wayland Public Schools.

From 1976-83 he was director of admissions and then later president and CEO of the Bryman School, a proprietary paramedical school in Brookline. Eventually he moved into antique appraisals and restoration.

No matter what other field he was in, his whole life centered around gymnastics, a love he shared with his wife, Lois. In 1967 he became a national judge through the National Gymnastics Judges Association, and in 1980 he received his Brevet rating, the highest gymnastics officials rating internationally, from the Federation of International Gymnastics.

Highlights of his gymnastics career included serving in various offices in the National Judges Association (East) including president, directing the Friends of Gymnastics Scholarship Fund, and directing the Dhahran Gymnastic Clinic in Dhahran, Saudi Arabia, for over 20 years.

In 1996 he received the National Gymnastics Judges Association (East) Hall of Fame award. He judged both nationally and internationally, including many NCAA regional and national championships, championships of the USA, USA Olympic Trials, the 1979 World Artistic Gymnastics Championships, the 1980 International Friendship Meet (held for countries supporting the Olympic boycott), the Cottbus Cup in Germany, and the 1981 World University Games in Bucharest, Romania.

An avid outdoorsman, he loved hiking, rock climbing, skiing, sailing and lobstering, especially on the waters off his beloved coast of Maine. His extended family and his ancestral history were important parts of his life.

He is survived by his wife, Lois Colburn; his son, Gregory Bacon and wife Diane of Westborough and their children, Taylor and Max; his daughter Keri Seery and husband Bill of Westborough and their son, Alex; and his daughter Carolyn (Carrie) Landry and husband Dennis of Lovell, Maine, and their children, Helena and Corissa. He also leaves behind his brother Karl Bacon and wife Cynthia Klonowski of Georgetown, Maine, his brother Glenn Bacon and wife Cynthia of Myrtle Beach, South Carolina, and his treasured cousin, Lorraine Williams of Jaffrey, New Hampshire.

There will be a celebration of life in the spring of 2021. Condolences and messages for his family may be submitted online at Duckett-Waterman.com.