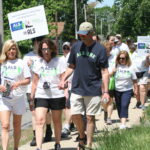 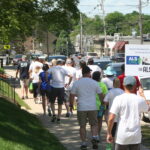 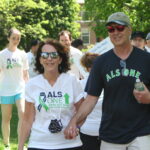 Becky and Jim Mourey lead the walkers at the start of the 4K. PHOTO/JERRY SPAR 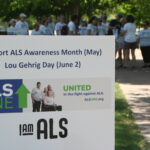 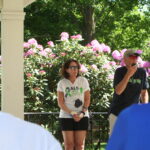 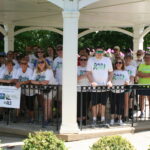 Participants pose at the Town Common gazebo before heading out. PHOTO/JERRY SPAR 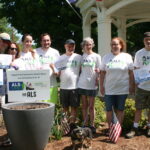 Becky Mourey poses with her family at the Town Common. PHOTO/JERRY SPAR 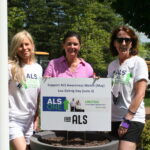 The nonprofit ALS One hosted a 4K walk/run at the Town Common as well as virtual this past Sunday. Hopkinton resident Becky Mourey recently was diagnosed with ALS (amyotrophic lateral sclerosis, also known as Lou Gehrig’s disease) and attended the event to help raise awareness and funds to fight the disease, which currently has no cure.

Mourey, a longtime music teacher (both in local schools and private lessons), started showing symptoms last June. While she continues to give music lessons, she has been unable to play the clarinet for more than six months, as “my atrophied hands and fingers will no longer allow it.”

Mourey notes that on average, people with ALS live 2-5 years from the date of onset. There are only a couple of therapies approved for use in the United States, and she hopes to help get more on the fast track to approval.

“Since my diagnosis I’ve been educating myself about my disease and I have been advocating for change nonstop,” Mourey explained, expressing frustration with governmental bureaucracy that has delayed other possible options.

“The saddest part for me and all of us living with ALS is how hard it is to be heard, to be seen, to get people outside of the ALS world to take pause and to imagine the unimaginable, and to act,” she stated.

Sunday’s event was a lead-up to June 2, when Major League Baseball will celebrate the inaugural Lou Gehrig Day to promote ALS awareness.