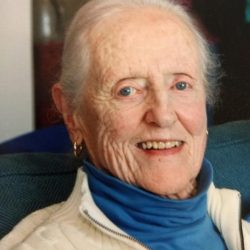 Martha “Mythi” M. Hesse, 93, of Hopkinton passed away May 21. Born and raised on the East Side of Providence, she was the daughter of the late Katharine (Merrill) and William McCormick.

Martha was a graduate of Lincoln School, Providence, and went on to graduate from Smith College, Class of 1949. While raising her family in Westport, Connecticut, she worked as a teaching assistant with children who had hearing impairments. After moving to Brimfield in 1973, Martha taught in the Museum Education Department at Old Sturbridge Village (OSV) and later became the coordinator of special programs, which included the OSV Elderhostel program. She treasured the friendships she made at OSV, with people she fondly referred to as “the usual suspects” (Ellen Rothman, and Peter and Trudy O’Connell), who filled her life with rich conversation and lots of love and laughter.

She is survived by two children, Kim M. Hesse and husband John Martire of Hopkinton, and Stephen T. Hesse and wife Naoko Sugiyama of Kokubunji, Japan. She has three grandchildren, Kate and Tai Martire, and Kye Hesse, who refer to her as “Dammie” and “Bata,” nicknames that she held dear. Martha was “the matriarch” of the Hesse-Martire family, which includes Amy Martire, Beth Cutter Hickman and Laura Cutter, and she shared a special closeness with her niece Martha Hesse and her family, Jay, Annie and Mollie. Martha’s nephews and nieces also include Peter, Nathaniel (Alice) and Megan. She was predeceased by her brother, William M. McCormick (Warwick, Rhode Island) and married for 32 years to Charles T. Hesse (Providence). Two friends of 70-plus years who filled Martha’s life with joy are Nancy Sayles Evarts (Garrison, New York) and Jody Holmes (Wilton, Connecticut).

Martha was a beautiful swimmer. During the summers when she lived on South Pond in Brookfield, Martha loved to take long, daily swims. Some of her grandchildren’s best memories are of kayaking, fishing, swimming and building snowmen on the lake. Later in life, Martha traveled each year to Japan to visit Steve, Naoko and Kye and shared close and lasting friendships with Naoko’s parents and friends of the family. Following her move to Worcester, Martha and Amy Martire spent many happy summer evenings picnicking at the Jazz At Sunset outdoor concerts. Martha was a voracious reader and a skilled portrait photographer, and during her life dabbled in painting, sketching, playing the ukulele and skiing.

The family thanks Martha’s doctors, Dr. Elizabeth Erban and Dr. Joshua Greenberg, for their many years of compassion and friendship. Martha will be missed dearly and remembered as an inspiration, the woman who continually beat the odds through numerous illnesses and surgeries and always took great joy in sharing the lives of her family and friends.

Private family services will be taking place. In lieu of flowers, donations may be made to the Southern Poverty Law Center, Doctors Without Borders, the Sierra Club and Smith College. Arrangements are under the care of the Chesmore Funeral Home of Hopkinton.