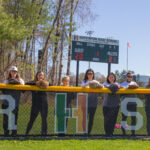 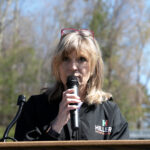 Superintendent Carol Cavanaugh was one of the guest speakers. PHOTO/JOHN CARDILLO 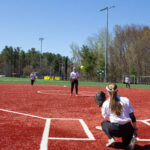 Participants watch as the ceremonial first pitch heads toward the catcher. PHOTO/JOHN CARDILLO 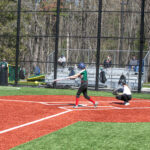 A Hillers player connects with a pitch. PHOTO/JOHN CARDILLO 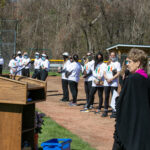 Kathy Kilduff, one of the individuals who helped spearhead the project, speaks to the crowd. PHOTO/JOHN CARDILLO 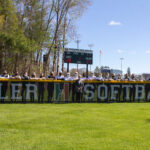 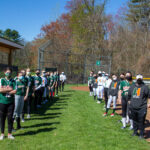 Players line the field in preparation for their game. PHOTO/JOHN CARDILLO 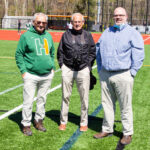 The Lauren Anderson Softball Field, at Field 6 behind Hopkinton High School, was re-dedicated Saturday with a ceremony and a game pitting HHS alumni against current players.

The project included fixing up the field, refurbishing the scoreboard, adding bleachers, dugouts and benches, installing outfield windscreens and more.

Lauren Anderson died in a horseback riding accident in 1994, when she was a softball player at HHS.