Planning Board expresses concerns about parking for 17 Main St. expansion 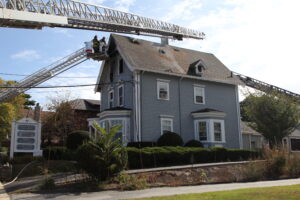 The building at 17 Main was damaged by a fire in 2020. FILE PHOTO/JOHN CARDILLO

The Planning Board at its meeting Monday decided in an 8-0 vote to continue the hearing for 17 Main Street after concerns arose about the parking layout and the ability of emergency vehicles to have enough space to access the building.

This was the first hearing before the board about this proposed project at Main and Church streets. Owner Tom Carey explained that he has owned the property since 2011.

“We had an unfortunate fire just about a year ago, and it damaged the front portion of the building quite dramatically,” he said.

The 21,000-square-foot property has three existing buildings, including the main structure, medical office space and a garage. The plan calls for the front of the main building to be renovated and a 4,000-square-foot addition to be built on the rear. A second floor is proposed over the existing garage.

The proposal calls for adding two apartments to the one there and increasing the amount of office space. The property currently lacks a drainage system as well as a required parking space for people with disabilities. A portion of the current driveway exceeds the property line by about 3 1/2 feet.

The proposal calls for the driveway to be moved back and to be made a one-way entrance. The current number of 17 spaces would be reduced to 15 to allow for an 8-by-20-foot accessible space for people with disabilities that can accommodate a van.

Fire Chief Bill Miller expressed concerns about the ability for fire trucks to make the turn radius and requested a swept path analysis. The design as presented showed that the fire truck would have to cross over the accessible space, even with an ambulance.

“We ask to do a swept path of our ladder truck,” he said. “What it does is it shows us that a ladder truck can get in.”

Chair Gary Trendel expressed caution that the project is adding space to the building while reducing the number of parking spaces. His second concern was emergency access.

“Candidly, given the prior history and that it’s in a congested part of town, I think that’s particularly important,” he said. “We want to make sure that in all circumstances the appropriate emergency vehicles can get into the lot of the building. So there’s a little more work to do there.”

Because the project is situated downtown, the parking space requirement is more relaxed, explained consultant Scott Richardson. The apartments would have reserved parking spaces, with the office space using the rest. There also will be 30 public parking spaces at the building next door that could be used, he explained.

Trendel noted that a retail establishment potentially could be used in what is planned for office space now, which would increase the number of parking spaces required for that use. There are four spaces needed per 1,000 square feet of retail, but only three spaces per 1,000 square feet for residential and office space, according to Principal Planner John Gelcich. In the downtown district, there is a 50 percent requirement for spaces for non-residential use.

“I just want to make sure that we think this through really, really well,” Trendel said, asking the project team to review the parking plan.

The stormwater management plan would need to connect to the future drainage system at Main Street. The corridor currently is under construction.

The project has been approved by the Historical Commission and will be reviewed by the Design Review Board on Sept. 21, according to Dave Marquedant, who spoke on behalf of the applicant.

A site visit is scheduled for Sept. 25, and the project will be reviewed at the Planning Board’s next meeting on Sept. 27.

The board unanimously voted to extend the solar special permit for the Wood Street solar project off of Mechanic Street for one year because the permit was set to expire on Dec. 27. There had been a delay in the processing of the interconnection application.

Brandon Smith explained on behalf of the applicant that several solar projects got “caught up in a solar transmission study,” which delayed the processing of the application. He anticipated it to be resolved by the end of the year, with construction slated for the beginning of next year.

Given the circumstances with the pandemic over the past 18 months, Trendel said the extension was reasonable. It has also been less controversial than similar solar projects.

“While there’s certainly been a lot of tension around many of these solar projects that we’ve seen, this has been one of the smoother ones,” he added. “I think this is one of the sites that, even from a town perspective, seemed to make sense for solar.”

The proponents for the Turkey Ridge Estates proposal requested and received a continuance until Sept. 27. The eight-lot subdivision would be situated off Cedar Street Extension and at the end of Lincoln Street, at the border with Southborough.

Member Deborah Fein-Brug, who is moving to Maine, submitted her resignation. She will stay on through the Sept. 27 meeting while the board seeks a replacement, which will involve a joint meeting with the Select Board.

“It’s been a pleasure getting to know every individual,” she said.