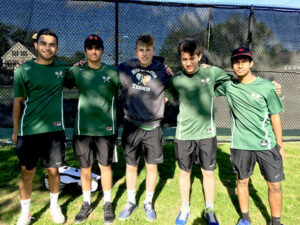 The Hopkinton High School boys tennis team had a feeling this would be a good season, with several experienced seniors leading the way and a building and bonding process that began well ahead of the first practice of the spring.

“We didn’t have a whole lot of seniors graduate and we did very well last year, so we just kept building and building,” senior co-captain Andrew Keeley said. “A lot of us did work in the offseason, we did clinics in preparation for the season and we started the team-building experience long before the season ever started.”

The results have shown. Hopkinton lost only one match (a 3-2 setback vs. Dover-Sherborn in their Tri-Valley League finale) and matched the high expectations of head coach Mike Miller, who said this squad went further than any other he has had in the past decade-plus without a loss. The Hillers won the TVL Large School Division for the second straight year, finished the regular season 16-1 and earned the top seed in the MIAA Division 2 South sectional.

“It’s a great team,” Miller said. “We never predict our record at the beginning of the year and I am not a big numbers guy, per se. Our objective is to have the best team we can possibly have.”

Mission accomplished. The senior group of Keeley, fellow co-captain Nalin Storm, and Imran Ladha have been nothing short of dominant in the singles spots. The trio rolled through most of the year unbeaten, just like the team as a whole. Storm was named Tri-Valley League MVP, while Keeley and the doubles team of Alex Guerra and Aidan Yagoobi were named TVL All-Stars.

While the records may be a bit better this year, success is nothing new to the tennis program. Miller said he has been impressed with the sustainability of his team’s high level of success over the years.

“As long as I have been there, you go through some ups and downs for sure, but I don’t remember many down years,” he said. “We have always been a top contender in the TVL. We have been fortunate to have some good payers to allow us to get into the tournament for several years.”

The success has not gone unnoticed, his senior captain pointed out.

“Tennis isn’t much of a spectator sport, and because of that we don’t get a ton of recognition at the school,” Keeley said, “but it’s encouraging when people come up to us and say, ‘You’re really good this year.’ We get support from our friends and from kids who have heard about the program. Maybe they haven’t shown up to a match, but they still understand that Hopkinton tennis is something to be reckoned with.”

The program received some recognition last year, Keeley said, with a banner in the athletic center to commemorate a TVL title.

Speaking before the end of the season, Miller said the goal is simply to keep the success rolling through the final few matches of the year and heading into the postseason. Keeley said the goal is to advance as far as possible in the tournament but, more than anything, he said keeping the overall positive attitude around the program is the top priority.

“We want to keep our confidence that we’ve built throughout the regular season,” he said. “It’s not just the guys who are starting, we want to be inclusive of everybody and make this journey as a team together.”