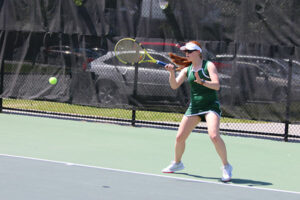 The spring tennis season has not played out the way the Hopkinton girls program and coach Lyn Calkins predicted, but the results have been what the team and coached hoped they would be. The Hillers have been able to weather several injuries and a relatively small roster en route to a successful campaign in the Tri-Valley League, repeating as league champs.

Hopkinton lost its No. 3 singles player from last year to an ACL injury just days before tryouts and suffered another injury midseason, forcing Calkins to reshuffle the lineup and put some younger players in the rotation.

“With these injuries, everybody has had to step up, and my whole mantra is that we don’t need quantity on our team, we just need quality,” the coach said. “We have a small squad and everybody works really hard and I just try to encourage everyone to be consistent. Consistency has helped us find the success we have found so far this season.”

Hopkinton posted a 15-2 record, going without a TVL loss until falling to Dover-Sherborn in its 14th league contest. A subsequent win over Holliston gave the Hillers another TVL title. They were seeded fourth in the MIAA Division 1 South sectional and opened postseason play with a 5-0 home victory over Bridgewater-Raynham on June 4. That put them in the sectional quarterfinals against King Philip on June 6.

The success has come despite losing junior Thrusha Puttaraiu, who was unbeaten last year, before the campaign began. Sophomore Sophie Kaplan, a doubles player, suffered an injury of her own in the penultimate week of the regular season.

Jane Stilwell, the lone senior on the team, moved into the top singles spot after being the No. 2 player a season ago. A tennis player since elementary school, Stilwell has been impressed by the team’s resilient nature.

“I am so proud of the fact that after any sort of setback, the first thing we do is encourage each other and show each other so much support,” Stilwell said. “I think that says a lot about our values.”

Sophomore Maya Storm moved up two spots from a season ago to the No. 2 singles position, and Calkins said she has done well in the tougher spot. First-year sophomore Maddy LaMachia has been pressed into third singles duty, in part due to the injuries. Junior Kate Lagassé has paired with Riley Krattenmaker, a freshman, to form the top doubles tandem.

Sophomore Vani Sharma and freshman Victoria Allen have come together as another solid doubles pairing.

“You could say we have some youth, with all the new players on the team, but they have adapted well,” Calkins said. “They are getting some immediate playing time as freshmen and, in Maddy’s case, as a new sophomore.”

Stilwell’s leadership as a senior has been instrumental in helping some of the young players on the team adapt quickly to their new roles at the varsity level in the highly competitive program.

“Jane is somebody who is a great role model to all of the players on the team” Calkins said. “Her work ethic, her positive attitude, they are huge assets to the team. She is always trying to learn more about the game of tennis and she is never intimidated by any of the strong opponents she faces. She is really going to be missed next season for sure.”

Stilwell, who was valedictorian and won the school’s female Scholar Athlete Award, said she has enjoyed her experience with the program, bringing a team concept to what is typically thought of as an individual sport.

“You have the bus rides, the spaghetti dinners, it’s been fun,” she said. “I love playing tennis and I love playing on a team. It’s a much different experience, it’s more rewarding and more fun.”