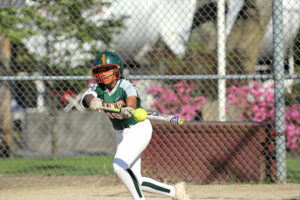 Senior Emily Whelan, who will play at UMass next year, became the first player in HHS history to amass 100 career hits.

Coming into this season, the Hopkinton High School softball program did not have a single player in its recorded history reach 100 career hits. After this year, it has two.

Leadoff hitter Emily Whelan became the first in school history to achieve 100 hits when she reached the milestone on May 6, and, one week later, fellow senior co-captain Katy Holly joined her in the exclusive club. 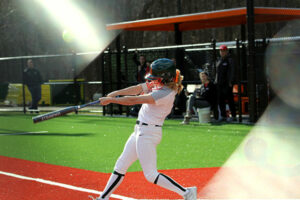 Senior Katy Holly, who is headed to Manhattan College, was named Tri-Valley League MVP after batting .620 in the regular season.

“I was super excited,” Whelan said. “I think it’s kind of cool that I was the first to get it in Hopkinton history, and it’s so cool that Katy got it, too.”

In both cases, the milestone hit came via a single. Whelan’s proved a bit atypical because it was not her typical slap style, but a base hit similar to the one that would later become her teammate’s milestone hit.

Holly, who was named Tri-Valley League MVP after batting a whopping .620 in the regular season with 34 RBIs and 32 runs scored, and Whelan, who was selected a TVL All-Star (along with teammate Jillian Ceddia) after hitting .535 with 12 RBIs and 31 runs scored, helped the Hillers to a 13-6 record (11-5 TVL) and the 13th seed in the MIAA Division 1 South sectional. Hopkinton opened postseason play by hosting Milton on June 6 in the preliminary round.

Both players made the HHS varsity squad as freshmen, and both hit up near the top of the order. Whelan, who plays second base, is a slap hitter who sets the table for the middle of the order, including Holly, who bats third and plays center field.

The players are continuing their softball careers at the Division 1 collegiate level next season. Whelan is attending UMass-Amherst and Holly will play for Manhattan College.

“It’s crazy that me and Emily both reached 100 hits,” Holly said. “It’s been fun playing with her all these years and I think we make each other better. So to do it together was pretty special.”

“They have both been starters since they were freshmen,” Hillers coach Shannon Allberry said. “Being in the ninth grade on a competitive varsity team put them in a great position to be leaders now for our underclassmen. They know what it’s like to be in tough situations and persevere, and that’s helped them out in the long run with their own games.”

Yet another similarity between the two is the support they have received from their parents, which they say has been instrumental to their success.

“I work with my dad a lot. I appreciate him for taking the time out of his day to hit with me, and I think it’s made me a much better player and got me to where I am today,” Whelan said. “I play for myself, but I play for him, too, because I know how excited he is when I do well, and I want to make him proud.”

Whelan said her parents, Stephanie and John, are always in the stands to watch her games, and part of the reason she chose a college within easy driving distance is so that they can continue to see her play at the next level. Holly’s parents, Linda and Bill, also are fixtures at games.

“My parents have been amazing, they haven’t missed a single game,” Holly said. “They have been there to listen to me and to support me through it all.”

One of the few things that will be different next year is that, when Holly steps into the batter’s box, she won’t see her friend and teammate on the base path, waiting to be driven in.

“It will be weird,” Holly said. “I love playing with her, and seeing her on base helps me. I’ve always felt comfortable knowing she will get herself around the bases and score.”