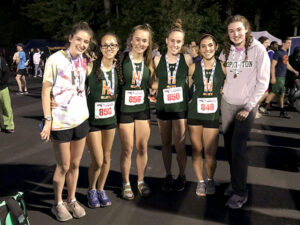 Hopkinton High School junior Schuyler Gooley continued her impressive season when she finished fourth in the mile at the All-State Track and Field Championships on June 1 at Westfield State University with a time of 5 minutes, 2.41 seconds.

“Schuyler’s race was tactical,” coach Jean Cann said. “They went through the halfway point six seconds slower than the previous week and she stayed with the leaders as long as she could when they started to ramp up the pace. She beat both girls who beat her the previous week. She was a little frustrated to be over 5 minutes yet again, but all her times have been faster than last year and she ran a fantastic race tactically.”

“The 4×100 was amazing,” Cann said. “They bettered their seed both in place and time, and their handoffs were flawless.”

Also earning a medal for Hopkinton was Olivia Jones, who took eighth in the 2-mile in 11:13.34.

Other HHS individuals at the state meet included Angie Grabmeier (20th in the triple jump), Donnelly (20th in the 100 meters), freshman Kate Powers (no score in the discus) and the lone boys representative, Alex Brown (16th in the 2 mile).

The Hillers qualified with their performances at the MIAA EMass Division 2 meet on May 25. Three Hillers placed in the top three in the D2 event, earning them automatic qualification: Jones was second in the 2 mile with a season-best time of 11:11.24, Powers was second in the discus with a throw of 110 feet, 3 inches — 1 inch behind the winner, and Gooley took third in the mile in 5:01.69.

Other stellar performances at the D2 meet were turned in by Maggie Allen (seventh in the 100 hurdles), Ben Powers (sixth in the javelin with a personal-best heave of 152 feet, 2 inches), Sierra Schlussel (eighth in the discuss at 94-6) and the 4×800 relay team of Jones, Abbi Fischer, Hope DeLuca and Gooley (eighth in 10:04.98). Also, Mick and Donnelly finished fifth and eighth, respectively, in the 200 meters, with Mick just missing all-state qualification by two-hundredths of a second.

The HHS girls finished in sixth place at the D2 meet, just five points out of third place.

Hillers who have qualified for nationals include Gooley (mile), Jones (2 mile), the sprint medley relay of Tolson, Donnelly, Mick and Estella, and the distance medley relay of Jones, Estella, Fischer and Gooley.

Playing at Ridder Farm Golf Course in East Bridgewater, Jaye double-bogeyed the 314-yard, par-4 first hole before rallying to win the event by three strokes, finishing with a 5-over-par 75.

Jaye went on to participate in the state championship on June 3 at Pleasant Valley Country Club in Sutton, finishing in a tie for eighth place with a 9-over-par 82, eight strokes back of first.

Jaye was a captain on Hopkinton’s Division 2 state champion team in the fall (the team’s second straight D2 title). The team is co-ed because Hopkinton does not have a girls team. So Jaye did not play high school golf this spring, until she participated in the postseason, having qualified by virtue of her scores in the fall.

Jaye is headed to Stonehill in the fall, and she will play golf there.

HHS senior Natalie Calkins scored her 100th career goal in the girls lacrosse team’s regular-season finale, a 17-11 victory over Dover-Sherborn on May 28. Calkins had five goals in the game, and she joined classmate Lydia Rudden in the 100 goals club.

The Hillers finished the regular season at 12-6 and earned the seventh seed in the MIAA Division 1 East tournament. They knocked off Bishop Feehan, 12-8, in their first-round game on June 3 and advanced to a quarterfinal matchup against second-seeded Franklin on June 6.

Calkins, who also played goalie on the Hillers soccer team that reached the Division 2 state championship game in the fall, was named female Hiller Student Athlete of the Year. …

Also on May 28, HHS boys lacrosse coach Dan Norton picked up his 100th career victory when the Hillers defeated Dover-Sherborn, 17-11.

The boys went 13-5 in the regular season and were the third seed in the MIAA Division 2 Central/East tournament. They hosted Wayland on June 5 in the quarterfinal round.

The HHS baseball team won the Tri-Valley League Large School Division for the second straight season, clinching the crown with a 6-4 victory over Norwood on May 30.

The Hillers earned the top seed in the MIAA Division 2 South sectional and were scheduled to open postseason play with a home game against the winner of a June 6 contest between North Attleboro and Milton. 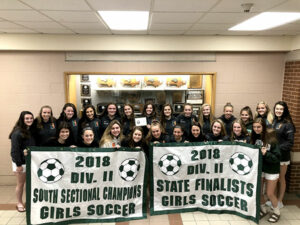 Members of the HHS girls soccer team pose with their Program of Excellence Award.

“The inaugural EMGSCA Program of Excellence Award recipients not only found success on the field, but they led the way off the field. The attachment to their community, the leadership roles they hold in school, and the character they build in the grueling fall sports season is something difficult to replicate,” the EMGSCA said in a release.

In addition to the Hillers, the other program winners were Hull, Mansfield, Marshfield, Medway, Needham, Winchester and Wilmington. …

The HHS unified track and field team was presented with a team sportsmanship award from the MIAA and Special Olympics Massachusetts.

The award is given for “outstanding demonstrations of sportsmanship and respect” during the season.

“Sophie is a phenomenal lacrosse player and athlete,” St. Mark’s coach Channing Warner said. “She is fast, smart, and dynamic on the field. This year, amidst a powerful attacking group with many collegiate-level players, Sophie led the team in scoring, which speaks volumes to her talent level. She balances being a strong leader and a selfless teammate perfectly. We are so excited we get one more year with her.”

Student has committed to playing Division 1 lacrosse at Virginia Tech after her high school career is over.

Hopkinton’s Kyra Parsons, a softball player at the Forman School in Connecticut, had a memorable freshman season. Parsons helped her team win the Housatonic Valley Athletic League title, striking out 16 batters in the league championship game, an 11-4 win over the Harvey School. Among Parsons’ other highlights on the season: In a 16-1 win over Masters on April 18, she pitched a no-hitter, hit a home run and collected four RBIs.

Forman advanced to the Class C New England tournament championship with an 11-2 record before falling to St. Luke’s School.

Parsons was named to the Western New England Preparatory School Girls Softball Association All-Star Game, although the game was rained out. 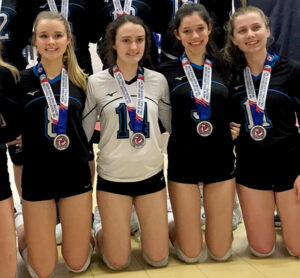 Four Hopkinton players were members of the CMass Juniors Volleyball 16s team that finished second at the New England Regional Volleyball Association championships on May 5. Cate Cestari (middle hitter), Rachel Leeret (setter), Mirabella Paolucci (right side hitter) and Hannah Quinlan (libero) helped their team to the silver medal in the open gold bracket — the highest level of play. The team will play in the national tournament in Indianapolis in July.

Hopkinton’s Jimmy Hervol, who last month wrapped up a stellar golf career at the University of Connecticut, saw his bid to reach the U.S. Open in Pebble Beach, California, come to an end.

After advancing out of local qualifying, Hervol competed in one of 12 sectional qualifying tournaments that were held around the country as well as Canada and England. His tournament was held June 3 in Purchase, New York (Century Country Club and Old Oaks Country Club), and the top four finishers there advanced to play at Pebble Beach. Hervol shot an 8-over-par 149 and was six strokes from the final qualifying spot. Overall he was tied for the 30th-best score. Among amateurs, he had the ninth-best total.