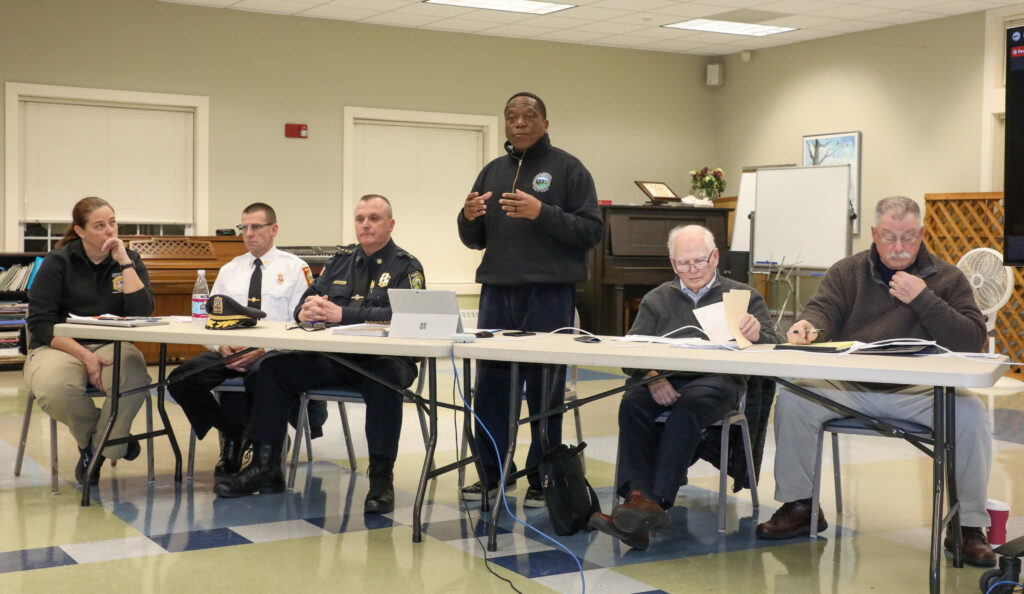 At a hybrid informational meeting Wednesday night held at the Hopkinton Senior Center, residents urged the town to take a step back from joining Grafton, Southborough and Westborough in a proposed regional emergency communications center (RECC), citing concerns about security and displacing some the town’s dispatchers.

Town Manager Norman Khumalo began by explaining that the meeting was an opportunity for residents to hear more details about the RECC feasibility study and to contribute their opinions and suggestions. The meeting ran for 2 1/2 hours, as some people vehemently expressed their opposition, speaking about the effectiveness of the town’s first responders and the fear that their experience and knowledge of Hopkinton will become lost resources in a regional operation.

“I believe that providing 911 services is an important aspect of our menu of services in Hopkinton,” Khumalo told attendees. “And it’s by design — by definition — incumbent upon us to make sure that whatever direction we take going forward incorporates your ideas and suggestions and incorporates your concerns.”

He noted that over his 13-year tenure as town manager, he has been asked to look into regionalizing dispatch services. An attempt to create a regional dispatch center with Ashland and Southborough failed in 2010. This idea is being explored now to improve efficiency, not to save money, he stressed.

The current RECC feasibility study initially included seven towns but was whittled down to four, which would cover about 70,000 residents (19.000 of which are in Hopkinton). It was prepared by Tom Kennedy and Stephen Foley, the consultants from the UMass Boston’s Collins Center for Public Management.

Consolidation is not a new concept, Khumalo added. Previously, the idea was floated to combine the fire departments of Hopkinton and Ashland. Health services were proposed at one time to be combined with Medway, Holliston and Ashland.

“Investigating an RECC is not intended in any way to impugn the quality, the dedication and commitment of our communications staff,” he stressed. “We are simply doing so as a matter of how we do business.”

Khumalo detailed the decision-making process. The next step if the RECC is approved by the Select Board is for the town to enter into an intermunicipal agreement (IMA) with the three other communities. As part of the IMA, if the town decides to have a district, the district decision would have to be approved by Town Meeting and subsequently by the state Legislature. After that, the town can apply for a state development grant in a competitive process. If that grant is approved, the “more definitive components” of the RECC will be more clearly defined.

There was some confusion among the audience about what a district entailed. The district actually provides the dispatch service, Khumalo explained. Select Board member Muriel Kramer compared it to Keefe Tech, a regional school with a board of directors. If a hosting center is chosen, then a vote could be taken at Town Meeting, but Khumalo said it may be a nonbinding vote.

Kennedy said the police and fire chiefs were interviewed in each town. Each facility was evaluated and its equipment analyzed. Staffing and financial analyses also were completed. It was determined that Westborough has a facility that potentially could be used for the RECC site, although Kennedy said a site is being considered in Hopkinton as well.

At a previous Select Board meeting, the former Center School on Ash Street had been floated as a potential RECC headquarters. Westborough’s proposed building is on a former Superfund site (contaminated land) and already has the backing of town officials.

“What we found is that it is feasible to consolidate, to regionalize, Grafton, Hopkinton, Southborough and Westborough into a regional emergency communications center,” Kennedy continued, adding: “It’s feasible because the public safety leaders in each municipality recognize the operational and financial benefits to do so.”

An RECC would provide greater standardization and interoperability, according to Kennedy. However, several residents countered with the sentiment expressed by resident Marlene Troupes: “If it ain’t broke, don’t fix it.”

As a former worker at the Senior Center for 25 years, Troupes described the close relationship she had with the dispatchers who regularly knew the names and situations of the people involved in calls.

She added: “I think we have very good care for our people now.”

Fire Chief Bill Miller noted that RECCs “have been around for decades.” He later described them as “the wave of the future.” He said 25 percent of Massachusetts cities and towns are part of an RECC.

Police Chief Joseph Bennett said he did not wholeheartedly endorse the RECC concept.

“It is part of government to look at options,” he said. “It’s just a fact of life. And if the town should decide to go ahead with the RECC, I worry about you. I worry about you guys right now.”

Some residents raised concerns that the other towns would benefit more from the RECC than Hopkinton, asking officials to delay joining. Westborough potentially could get the RECC building, while the other two towns only have one dispatcher currently and would augment their capabilities in an RECC.

Others brought up an RECC that combined Hopedale, Mendon and Millville. Hopedale pulled out in 2012 after three years, complaining about problems with communication and cooperation, according to multiple media reports at the time. A specific issue raised was mishandled calls — including an hours-long delay in getting a police officer to the site of a hit-and-run crash in 2011. In 2015, Hopedale entered into a new regional dispatch agreement with Upton.

Michael Shepard spoke about how knowledgeable the first responders are about Hopkinton. He has taught his children and now his grandkids to go to them whenever they may need help.

“These guys are the best part of our community and the part of the community we depend on.”

Khumalo added that he is taking responsibility as to why residents were not informed sooner about the upcoming deadline to submit the RECC application. He said that the town was “unaware that we needed to move very quickly” until November or December. That was when he learned about the application deadline and IMA deadline in early March. He noted that the other towns can move forward without Hopkinton.

Khumalo explained that the taxpayers would fund the creation of the IMA. Also, if the town pulled out of the RECC, Hopkinton would bear a financial responsibility. It also would lose its own equipment because it would have to use the equipment provided by the state.

Pat O’Brien, a former longtime Hopkinton police officer, explained that the town invested in a software platform called ProPhoenix about a year ago, an expense that would be wasted as well as “countless hours of training” if replaced in the RECC.

Select Board member Shahidul Mannan echoed the concern about any financial risks to the town. He also lamented the potential loss of camaraderie among the first responders and their connection to residents.
He added that, as soon as the Select Board learned of the timetable for the decision, which must be made in the next couple of weeks, the members sought to share information. The holidays interfered with the ability to hold meetings.

Communications union president Robert Savolt said he feared the impact of what was termed as “dark stations” with no dispatchers in the late evenings.

“We love seeing you come into the station,” he said, fearing an RECC would resemble “a corporate operation.”

“Is it worth giving up this community aspect for potential savings?” he added. “Frankly, once you lose us, we’re gone.”

“I’ve dedicated my whole adult life to this job,” added Evan Brooks, a dispatcher of 21 years. He said he feared losing his job or losing seniority if he is retained as part of the RECC.

“The intimate knowledge we have one day could save your life,” he said.