Rally planned to push for investigation into ‘murder’ of Hopkinton teen 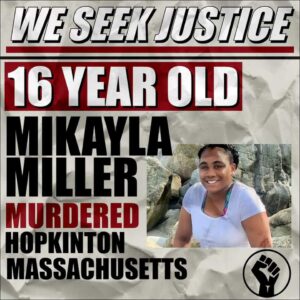 Editor’s note: This story has been updated with a new statement from District Attorney Marian Ryan.

A rally is planned for Thursday on Main Street to “demand answers” regarding the recent death of Hopkinton High School sophomore Mikayla Miller.

According to a Twitter post from Monica Cannon-Grant, the 16-year-old, who was Black, was “murdered in Hopkinton on April 17, 2021.”

Cannon-Grant wrote that police told Miller’s mother to “trust them it’s suicide.” However, Cannon-Grant claims, investigators are “ignoring that 5 White Teens beat her the same day.”

Cannon-Grant goes on to claim that Middlesex District Attorney Marian Ryan “refuses to speak with these teens, investigate or provide any police reports and documentation. Hours later Mikayla is dead and We are Demanding Justice!”

“This is not a suspicious death investigation and there is no foul play,” a Middlesex DA spokeswoman told the Independent on Wednesday. “The case remains open pending a ruling from the Office of the Medical Examiner.”

In a statement posted to Twitter on Sunday, however, Ryan wrote: “While we await a ruling on the cause and manner of death from the Office of the Chief Medical Examiner, we will continue gathering information and interviewing witnesses. As this investigation unfolds, we will continue to be in contact with Mikayla’s family and their representatives.”

The rally is scheduled for Thursday at 4:30 p.m. at the Boston Marathon starting line, according to a promotional poster for the event.

Hopkinton High School principal Evan Bishop had emailed the HHS community on April 18 to announce Miller’s death, and to make students and staff aware there was grief counseling available.

“It is with a heavy heart that I inform you of the death of one of our high school students,” Bishop wrote in the April 18 email. “Out of respect for the family, we are not releasing the student’s name.”

Added Bishop: “We have convened our Crisis Response Team … to put supports in place for students and staff. The loss of a student has a ripple effect on the school community; therefore, we will be providing counseling services. Every effort will be made to support our community as we deal with the grief and loss resulting from this tragedy.”

Bishop followed with an announcement in school on April 26 [Editor’s note: corrects from April 19] in which he revealed Miller’s name and told students, “We acknowledge that you will hear speculation and rumors around the incident, but that we want to respect her family’s privacy at this time. We don’t have all the answers. It’s a sudden and tragic loss. Let’s focus on how Mikayla lived, not how she died.”