One day in 1919, Hopkinton High School teacher Ellen Duffey timidly waved her handkerchief at her boyfriend, who watched her from the town center. Little did she know, that gesture would turn out to become a key factor in her termination and the beginning of a protest that put Hopkinton on national display.

Fast-forward a century, and Hopkinton Historical Society member John Palmer has published “The Story of Miss Ellen Duffey,” in which he details the events that transpired that winter. This book allows Hopkinton history buffs and people of all ages to be a part of history, and take a look at the several perspectives of local government.

“I joined the Historical Society because I wanted to get to know the history of this town after living here for so long,” said Palmer, 81. “While browsing, I stumbled upon newspaper clippings about Miss Duffey and was instantly fascinated.”

Those newspaper clippings led to a fascinating story that captivated the town. Ellen Duffey had previously supported the presiding superintendent in a vote against the chairmen of the Board of Selectmen and School Committee. Soon after, Duffey was terminated under indictments that included flirting during class time, insubordination and abusing a parent.

The “flirting” was Duffey waving her handkerchief at her boyfriend, who worked as a motorcar driver. The “abuse of a parent” was Duffey’s suggestion to a student to place their mother in a lower motorcar so it would be easier for her to sit comfortably. The student and family insinuated that it was Duffey’s way of calling the mother overweight.

“She was a well-respected woman,” Palmer said. “She had many credentials and abilities, which made this case even more interesting.” 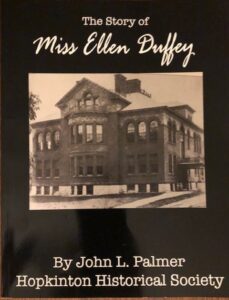 A suggested motive to falsely accuse Duffey of these allegations was in relation to a vote that was taking place. Duffey defended the superintendent on a public issue, which made the vote on the matter equal. Termination gave the chairmen an opportunity to establish their power and take away the credibility of Duffey’s vote.

“When you think about the basis for her firing, it was based on mainly politics,” Palmer said.

The book highlights the social and political time period of the 1920s to now, and the shift from a very male-centric society to a more balanced society for men and women in politics, locally and nationally. One of the key events in the book gives light to the first time women were authorized to vote in local town meetings. Duffey also is looked at as a prominent figure for women’s empowerment and equality.

Following Duffey’s termination, the subsequent protest by students and parents was unexpected for the small town of Hopkinton. More than 90 percent of students went on strike and refused to return until Duffey was reinstated. Meanwhile, warrants were filed against Duffey and six other well-known Hopkinton citizens for assault and inciting assault after a protest in the center of town. Their case eventually was taken to trial at the Framingham Courthouse. These disputes were not settled until late February of 1920, but unrest still was very much prominent back home. Citizens of all backgrounds, including veterans, housewives and children, came out in support of Duffey, who eventually was reinstated following a court ruling. This garnered media attention nationally.

A Radcliffe College graduate, Duffey was a well-liked English teacher who eventually became principal. She began teaching at age 26 and remained in the school system for the next 47 years. After she retired in 1954, she went on to be a member of the Hopkinton Historical Society, and, later on, president of the Women’s Club of Hopkinton until her death in 1964 at the age of 77.

“She was the equivalent to any woman in charge today, and very well qualified,” Palmer said.

“The Story of Miss Ellen Duffey” has an interesting format. Each chapter takes its title from an actual newspaper article created at the time of these events. This gives the reader the opportunity to read the entire book as if they are experiencing these heated moments firsthand and learning new developments at the same pace as people in 1919-20.

After publishing the first 50 copies of the book, Palmer distributed them to people who as youngsters had Duffey as a teacher during her almost five-decade-long career in education. Palmer then printed 125 more copies and decided to make it available to a bigger audience.

“This was just going to be a paper, but it kept going because the actual story of the events took so long and there were so many aspects to it,” Palmer said.

The book costs $10, and proceeds go to the Hopkinton Historical Society (visit hopkhistsoc.org for purchase information).

Asked what advice he would give an aspiring nonfiction writer, Palmer had a simple message: Find a good story. This he certainly accomplished through “The Story of Miss Ellen Duffey,” which chronicles an important event in Hopkinton’s history.