Waldman ready for new challenge after 15 years at HCA

After a decade-and-a-half building Hopkinton Center for the Arts, Kris Waldman will step down as the nonprofit’s co-director at the end of this year.

“I am ready for a fresh challenge in my life,” Waldman said. “I have been with the center for 15 years in various capacities and seen it grow and thrive and now I am ready to explore something else.”

Waldman has been immersed in the arts and bringing them to the community since she was executive director of the Cultural Arts Alliance. Her partnership with Kelly Grill of Enter Stage Left led to the current HCA, which now offers hundreds of arts classes to thousands of students each year.

“Kelly and I always had these huge aspirations and many people thought we were crazy,” Waldman said. “At the time, we were in the farmhouse and we talked about wanting to build out and create a professional theater and a gallery and have these beautiful classrooms.”

Those goals came to fruition with the expansion of the HCA barn, which was largely driven by the efforts of Waldman and a team of supporters in marketing, fundraising, grant writing and managing the capital improvement project in 2014 and 2015. 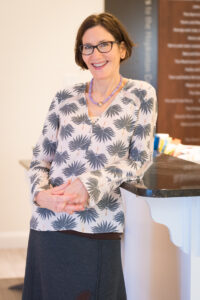 Kris Waldman has helped guide the transformation of Hopkinton Center for the Arts for the past 15 years.

“That was the dream of many, many people but they couldn’t quite, I think, wrap their minds around the fact that this might actually happen,” she said. “Not only did it happen, it’s exceeding my expectations.”

Nowhere is this more evident than in the increase in student participation over the past nine years. Just 66 students participated in HCA programs in 2011. Now, that number is over 2,200 annually, with visitors from more than 340 communities in the United States, Canada and even Europe (via online programs).

Waldman said she has seen young people become more confident through their time at HCA.

“I can see that their lives are changed,” she said. “They come to HCA and they find this outlet for expression and happiness and they make friends. It’s really life-affirming for them.”

And it’s not just young people who have realized the benefits of spending time at HCA.

“I can recall one woman who said that discovering and building skills to express her creativity totally changed her outlook on life,” Waldman said. “She told me it actually changed her relationship with her husband. It changed her work and affected her friendships.”

Waldman said she hopes to focus on her own artwork. She said that, given her penchant for creativity, she gets “restless” every decade or so and is curious to see what new challenge may wait for her around the next corner. But the COVID-19 pandemic also has called into sharp focus just how precious life is, she said, and stirred her desire to take time to explore her own creativity.

“When Kris first told me and our Board about her decision to move on, we were sad to learn this news, but understood it was borne of her yearning to expand her experiences and apply her creativity in new ways,” HCA board chair Janet Ceddia said.

“Kris explained that after much thoughtful consideration, she wants to reconnect to her own art and that this pandemic has stirred within her a desire to apply her creativity to help those most severely impacted, particularly on issues related to hunger,” Ceddia added. “With such noble ambitions, we are thrilled for Kris and her next adventure.”

Waldman said she will paint, take photographs and sculpt, among other artistic outlets. She leaves with a great sense of gratitude for many who helped build HCA along the way. In addition to Grill, the list includes Chuck Joseph, whose organization served as a fundraising arm for HCA’s expansion in 2015. Sandra and Kevin Delbridge, who funded the performance space, and Lorelei and Alan Lotvin, who funded the gallery space, also were instrumental, Waldman said.

“I want to express my immense gratitude for HCA’s rock-star staff, our dedicated and passionate teachers, volunteers, and boards of directors, and the tremendously supportive and generous community of Hopkinton,” she said. “Also vital to HCA’s success has been the Hopkinton Community Endowment, the Massachusetts Cultural Council and the Hopkinton Community Preservation and ADA Committees. Last but not least, I am thankful for the founders of the Cultural Arts Alliance and Enter Stage Left Theater, who planted the seeds for HCA many years ago.”