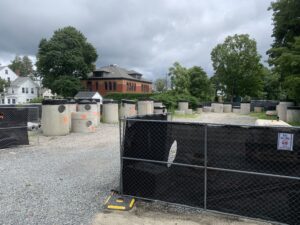 A Marshall Avenue resident filed an open meeting law complaint with the Office of the Attorney General about what she sees as a lack of transparency regarding the storage of construction materials for the Main Street Corridor Project.

Lucia Lopez originally filed a public records request with the town that the discussion of storage materials was not on the agenda for the Select Board meeting on March 2 because Town Manager Norman Khumalo said he had been informed of the construction company’s request that afternoon.

“In an effort to understand the process by which the staging areas were chosen and approved, I submitted a public records request and discovered that the town manager appears to be avoiding allowing resident input by not being entirely forthcoming with the Select Board,” Lopez said. “The manner in which the town manager is conducting business is deeply concerning.”

Lopez received a response from Assistant Town Manager Elaine Lazarus on May 7 noting that her request was received by the office on April 26. In that response, Lopez was given a link to documents relevant to the project.

In this information was a letter from Town Engineer Dave Daltorio dated Feb. 24 to both Khumalo and Lazarus. Under a section entitled “Not for Agenda,” the following request, copied directly from the letter as written, was made by Daltorio about the contractor. (Typos in the original document have been included.):

“They would like to use Marathon Way, 6 Walcott, Marshall Street for storing pipe, structures, parking excavators overnight, and for their employees to park? Other projects have used Marathon Way (Eversrouce Gas). Do we need to ask the Select Board to approve the use of these locations? No fill material will be stored there and a temp chainlink fence would be installed. (Do we include this in the update and ask the Select Board?)”

Lopez said that Khumalo’s statement at the Select Board meeting that he received information on the afternoon of the meeting would appear to be false if this email, which included a reference to the contractor, was dated six days prior to the meeting.

“Learning that the town manager and town engineer knew about the staging areas six days prior to the March 2 meeting and that the town manager introduced the discussion to the Select Board as something he’d just learned about that afternoon leads me to wonder what else he is misrepresenting and to whom,” Lopez said.

Lopez said she had 30 days to file the open meeting law complaint. She filed her request March 31 for information concerning what she believes is a violation.

“I wasn’t involved until two weeks after that meeting, so I was playing catch-up about learning as to the approval of the staging areas,” she explained, noting that the storage of materials directly impacts her home and young children. “I have been trying to work with the town to get information.”

Storage of construction materials in the Marshall Avenue parking lot also was discussed at a Parks & Recreation Commission meeting on March 17.

In a response to her records request, Lopez received a letter from the town’s law firm, Miyares and Harrington, at the request of the Select Board. The letter stated that the Select Board met on April 6 regarding her complaint and did not consider the issue to be a violation of open meeting law because a Main Street Corridor Project update was included on the agenda that was posted 48 hours in advance.

“That notice sufficiently identified the ‘Main Street Corridor Project’ as the subject of its update, thus providing the ‘listing of topics’ required by the statute, and the ‘reasonable specificity’ required by the regulations,” the letter stated. “Any person interested in the Main Street Corridor Project was placed on reasonable notice that the project, including its status and any imminent actions, were to be discussed and possibly acted upon by the Select Board at its meeting. And, in any event, the Chair could not have anticipated that the course of the Select Board’s discussion concerning the construction update might specifically involve a request, made that same day by a construction contractor, to use Marathon Way as a laydown area.”

Khumalo, in an interview, said he stands by his actions and statements. He said he was simply trying to bring the matter to the attention of the Select Board. “There was no way that I was trying to circumvent the process,” he added.

Part of Lopez’s concern arose from a previous situation with Eversource last year at the Marshall Avenue lot, she said. Eversource began to store sand and salt on the lot without notification to the residents.

Eversource’s use of the lot was referenced in the March 2 Select Board meeting. At that meeting, there was a vote on the use of Main Street but not the Marshall Avenue lot. The attorney’s letter referenced that Marshall Avenue “was only briefly mentioned.”

Lopez decided to bring this complaint to the Attorney General’s office to be further examined in light of the letter from Daltorio and other documents she received in the public records request, she said.

“I made this request because this is me trying to understand the process,” she said. “It is my understanding that the complaint is still being reviewed by the Attorney General’s office.

She added that a response from the Attorney General’s office “could take months.”