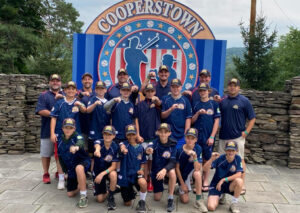 A group of 12-and-under Little Leaguers from Hopkinton competed in a national tournament in Cooperstown, New York (site of the National Baseball Hall of Fame), last week and put together an impressive performance in the playoffs.

The team, which was formed independently of Hopkinton Little League, went 1-5 in its six pool games and was ranked 57th of 65 teams entering the single-elimination portion of the competition last Wednesday. Hopkinton then pulled off three straight wins in the single-elimination playoffs, knocking off teams from Buffalo (9-7), Chicago (6-2) and Los Angeles (25-11). Then in its fifth game of the day — and fourth in a row — Hopkinton suffered a heartbreaking 9-8 walk-off loss to a New Jersey team.