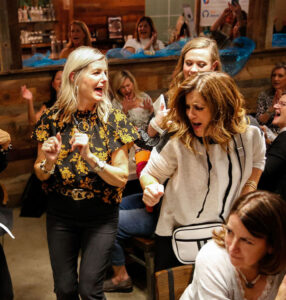 The greater Hopkinton community will have a chance to fight a “silent killer” of women with a celebration of life — a fashion show — on April 12 and 13. The fun evening, which includes dinner and a cash bar, will benefit research in detecting and curing ovarian cancer.

According to the Centers for Disease Control and Prevention, ovarian cancer is the second most common gynecologic cancer in the United States and, since many women don’t recognize the symptoms until the disease has progressed, causes more deaths than other female reproductive cancers. This year the American Cancer Society estimates there will be about 20,000 new cases in the U.S. with about 13,000 women dying of the disease. The symptoms include bloating, pelvic or abdominal pain, difficulty eating or feeling full quickly, and urgency or frequency of urination.

“Many of the symptoms for ovarian cancer are symptoms which women experience day-to-day,” said Marie Boyle, who along with Kathy Mazur hosts the Fashion Show, now in its third year. Both women were diagnosed with ovarian cancer and, after undergoing treatments, are doing well.

Boyle said she, like most women with the disease — 75 percent, according to the American Cancer Society — are diagnosed at an advanced stage of the illness, meaning more invasive therapies and higher mortality.

“Early detection is the key to fighting this disease,” said Boyle. She noted there is currently “no device to detect the cancer early.” To help remedy that situation, all proceeds from the Fashion Show go through the non-profit girlygirl P.A.R.T.S. (Prescreening Awareness Required To Silence) to support Ursula Matulonis, M.D., chief of the Division of Gynecologic Oncology at the Dana-Farber Cancer Institute, and her team, who are working to develop an early pre-screening tool. Dr. Matulonis has attended the last two shows and will participate in this year’s event.

While fighting a deadly cancer is serious business, the Fashion Show is anything but.

“This is not your normal fashion show,” said Boyle. The models, who all are cancer survivors or currently being treated for the disease, “are energetic and full of life. With music pumping, they dance down the runway with audience members. Everyone is having fun,” she said. “It is really a celebration of life.”

Mazur, whose business, Swoon, supplies all the outfits worn in the show, said, “It is uplifting to see these survivors loving life and full of energy. They are inspirational.” She added the event also is positive for the models, since “it gives them a chance to be with others who understand what they have gone through and to feel good about themselves.”

The community has rallied around the event, with individuals and businesses providing sponsorship and services. “Everyone who takes part in the show is a volunteer,” said Mazur. The volunteers include Swoon employees, who help select outfits and dress the models. Hair is styled by Hair Haven and Glam Salon and Day Spa, while volunteers including Suzanne Hewett do the makeup. Members of girlygirl P.A.R.T.S. help behind the scenes while others donate flowers, baked goods and more. Ginny Martins &Associates of Southborough is the gold sponsor. “We are so happy to have such surrounding community support,” said Mazur.

The past two Fashion Show events raised about $40,000. Mazur and Boyle hope this year’s edition has similar success. Tickets for the Fashion Show, which is held at Central Public House on Main Street from 6:30-9:30 p.m., are $100 and go on sale March 23 on Eventbrite or by contacting Libby Skiba at libskiba@yahoo.com.

Additionally, for a week after the show attendees will receive a 10 percent discount at Swoon, and the store, located at 5 Walcott Street, will donate 10 percent of its sales to the fundraiser.