Residents get creative to deal with quarantines, social distancing 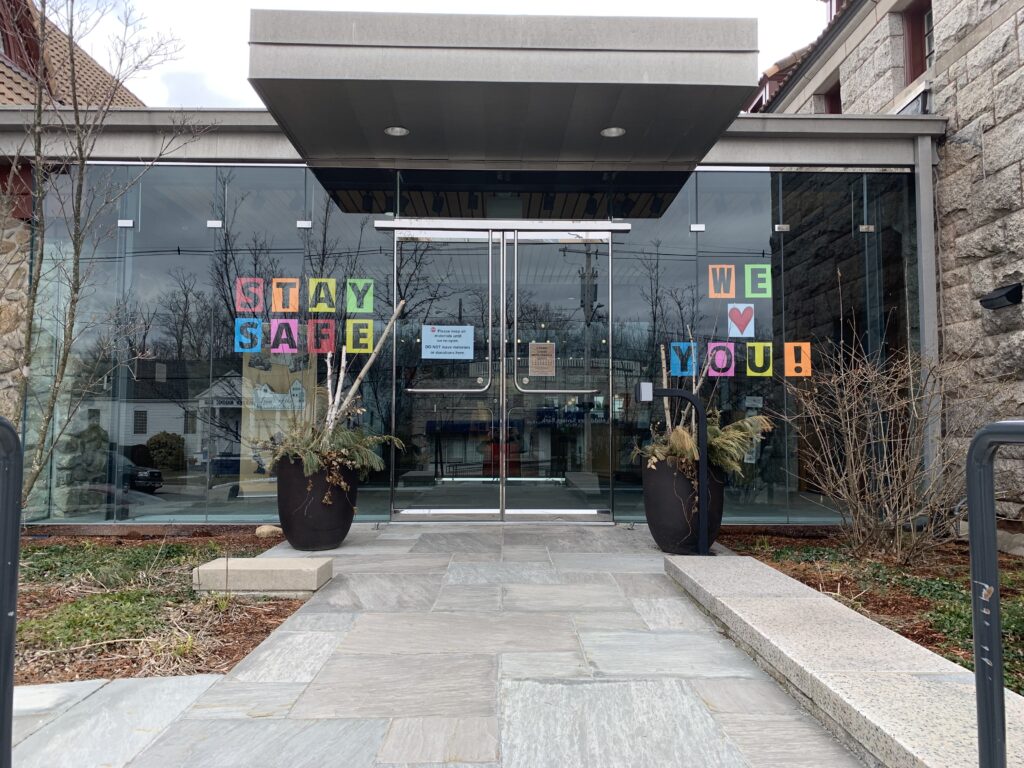 The Hopkinton Public Library is closed, but staffers sent a message of encouragement to the public during the coronavirus pandemic. PHOTO/JERRY SPAR

Coronavirus can make it feel like the walls are closing in, but Hopkintonians are finding ways to make the best of a bad situation.

As residents adjust their work, school and personal lives around the temporary new practices of self-quarantines and social distancing, a couple of common themes have emerged: gratefulness and perseverance.

Dennie and Brad Walker, who live in town with their three school-aged children — Sean, 16, Bridget, 14, and Isabel, 11 — are like many families during this time of COVID-19 virus-related isolation — stuck at home with a lot of extra time on their hands.

“Definitely you can go a little stir-crazy,” said Dennie, who works as a preschool teacher at Hopkinton Christian Preschool. “I feel so fortunate as a family that we get along so well. So that hasn’t been too much of an issue.”

The Walker family remains happy and healthy, but like most they have had to adjust their daily routines on the fly.

All three kids are home from school — Sean and Bridget go to Hopkinton High School, while Isabel attends Hopkins Elementary — for the foreseeable future. Dennie and Brad, who both have careers in the education field, are working from home.

“We’ve been finding activities to keep us busy and to keep us engaged,” said Brad, a teacher at Needham High School. “We’ve been doing puzzles and watching classic movies and practicing tai chi, so we’ve had enough to kind of engage us so that we’re not going absolutely nuts.”

School might not be in session, but many institutions are encouraging students to take part in non-assessed enrichment activities. As Brad notes, new guidelines and curriculums from the state are forthcoming, but in the meantime parents are left to decide how best to structure their children’s education time.

“I have to say we’ve been less structured like that. I think it’s kind of nice to let the kids — I want to make sure they get done what they need to get done — but more on their own time. One way’s not better than the other, it’s just different approaches. I find that we are able to be less stressed if we give them a little leeway.”

One silver lining of self-isolation in the social media era is the variety of options available for face-to-face interaction. While individuals might not be able to physically congregate, technology allows for adults and kids alike to gather from afar.

“I didn’t even know what Zoom was a few weeks ago, and [my kids] actually introduced it to me because they started getting onto Zoom with their friends,” Dennie said. “In the meantime, for work, I’ve had to use it.”

Added Brad, “When I was an adolescent, I can’t imagine how upsetting it would have been to be that far away from my peers and friends for so long. But they use that technology, they’re able to connect and play video games together, they do group chats, video chats and audio chats, and so they’re able to stay connected in a way that’s pretty remarkable.”

A family of five with daily routines that normally pull them in different directions have all been pulled back together under the same roof. And yet throughout the chaos, they have been able to maintain positive attitudes.

“I feel so fortunate that we’ve been able to sort of get the food that we need and we haven’t needed any medical supplies or anything like that,” Dennie said. “So I guess apart from just not being able to do what we want to do all the time, I feel like it hasn’t had a huge impact.”

Older residents in town, like 90-year-old Jo Foster, have found themselves confined to their homes due to the increased risk the COVID-19 virus poses to the elderly.

Foster, who moved to Hopkinton from Framingham two years ago, said she normally is out on the town six out of seven days a week.

“It’s been a pain. I can’t go out of the house because I have asthma,” Foster said. “I have two daughters that see me constantly — they won’t come in the house, either, so they won’t spread it. It’s been very lonesome.”

The cheerful Foster said she is still hearing from plenty of friends on the phone throughout the week, and also praised the job the Hopkinton Senior Center has done to stay in touch with seniors during the virus outbreak.

“It’s unbelievable,” Foster said. “I’m kind of tired of talking on the phone.”

Foster insisted she is being well cared for during this time by her daughters — perhaps a little too well.

Businesses have had to adjust to consumer needs as well as government mandates and disease-control regulations. Non-essential businesses were shuttered in Massachusetts until at least April 7, forcing them to be creative to keep a steady income. The Hopkinton Center for the Arts transitioned its spring classes to a virtual format.

Many restaurants are offering takeout only, and some that did not previously have a delivery option quickly moved to put one place.

“It’s been very difficult, very difficult,” Bill’s Pizzeria owner Zach Siarkos said. “A lot of adjustments to be made. Most restaurants we all function with proper sanitary conditions, that’s part of owning a restaurant, running and working in a restaurant. But the psychological aspect of working with customers in these times is something new that most people aren’t used to.

“Now, of course, we rely heavily on dine-in and our bar — that’s all shut down. We have begun delivering, which we didn’t do in the past, so that’s a help. Takeout [business] is pretty good, but I don’t know how long, you know? We have been pushing curbside so people don’t have to come into the restaurant. We’re being very strict on if anybody has a runny nose, even a cough, you know, stay home. And on top of that, it’s been very difficult trying to keep staff. Sales were under half of what we normally are, so trying to hold all the staff has been challenging to say the very least.”

For some, business actually has been booming.

“It is such an influx of business for us. I think between the groceries, the food that we sell and the adult beverages we sell, we’re truly turned into a one-stop shop for everyone,” Werrick said. “Our business, knock on wood, our business is doing very well.”

However, as much as Werrick has tried to keep smiles on customers’ faces, she admits that there is only so much she can do to distract from the reality of a gloomy situation.

“People are trying to keep it light, and I try to keep things light also, but quite a few people have confided in me that they’re very nervous and scared,” she said. “They don’t see this ending anytime soon, and that’s the general consensus.”

Added Siarkos: “Generally customers have been pretty positive. I think those are the people that are still coming out and picking up food. The staff, you know, just weary. You’ve got to be aware of everything. Everyone’s wearing gloves up front, no handing anything to customers, we don’t take cash anymore, card only, sanitize after every customer. It’s a little draining. But it is what it is.

“Just let’s hope this doesn’t hold on too much longer.”

Residents do their part

With coronavirus cases in the state rising daily and an increasing outcry from medical facilities for additional equipment to protect doctors and nurses, other Hopkinton residents are doing what they can to help medical professionals on the front lines.

Shunfu Hu, a Hopkinton resident originally from China, used his own money to purchase and donate personal protective equipment to major hospitals in Boston. When his neighbors heard about his efforts, they joined in to help (email pjbernardin@verizon.net for information on contributing).

“[We are not] wealthy individuals, but from our heart, we knew we should do something for the community, especially at this moment, to cheer and encourage people,” Hu said. “Such generosity and kindness from all nations inspired me and that is the beauty of humanity in our mother earth … America is a multi-national country, and united we are strong.”

Even as the entire town grapples with how best to go about life during a global pandemic, both in their own lives and in society, the sense of community that Hopkinton is known for remains strong.

“I think it’s so funny when we go for walks and things, and it’s like from 100 yards away you’ll see someone — it doesn’t matter if you know them or not — but people just greeting each other and stuff that wouldn’t normally,” said Dennie Walker. “But it’s just so nice to see another human outside the house.”