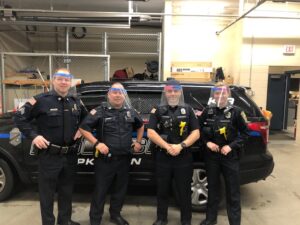 Hopkinton police officers post with face shields that were created and donated by residents and others on a team organized by Hopkinton Public Schools technology teacher Doug Scott. PHOTO/HOPKINTON POLICE TWITTER

April 2
1:52 p.m. A Jamie Lane resident reported someone stole a package from the steps of his home. Officers Philip Powers, John Corridan, Matthew Santoro, Brian Sanchioni, Lieutenant John Porter and Sergeants Timothy Brennan and Scott van Raalten responded. While on a detail, Officer Derek Morton reported the suspect passed him in a vehicle. The suspect was caught on West Main Street. Damien J. Lee, 18, of 16 Beacon Street, Clinton, was arrested and charged with larceny under $250, possession of Class D substance over one ounce, possession Class D substance with intent to distribute, and possession of Class E substance. Officer Moira McGaffigan subsequently recovered the stolen property.

March 31
1:14 a.m. Multiple callers reported a transformer blew and power was out on Hayden Rowe, Ash and Nebraska Streets. Sergeant William Burchard responded and confirmed the power outages and reported neither smoke nor fire were present. Eversource was notified.
3:38 p.m. A caller reported children playing on the high school turf field on Hayden Rowe Street in violation of the governor’s orders. Officer Derek Morton responded and removed them.
4:40 p.m. Officers Brian Sanchioni and Preston Mucciarone assisted regional animal control by checking on a person. They were unable to make contact, as the residence had been sold.
5:20 p.m. A caller reported his golden retriever ran away while in the Upton State Forest on the Hopkinton side. The animal control officer was notified.
6:45 p.m. A Woodview Way caller reported a package that had been delivered around noon by UPS was stolen from the front door of her building. Officer Derek Morton responded and assisted the reporting person.

April 1
6:05 a.m. An off-duty firefighter reported a vehicle on fire on Interstate 495 near the 21A exit. Officer Stephen Buckley responded along with the State Police and the Fire Department. The fire was extinguished and a tow truck removed the vehicle.
8:10 a.m. A caller reported a raccoon chased her and her dog on Forest Lane. Officers Moira McGaffigan and Ryan Polselli responded and checked the area with a negative find.
9:50 a.m. A Riverbend Road caller reported a raccoon had been walking around the neighborhood and acting strangely. The animal control officer was notified.
10:53 a.m. A Chamberlain Street resident complained of a vehicle speeding down the street and wanted it logged.
11:15 a.m. A caller in Texas reported he received a scam phone call stating his grandson, who lives in Hopkinton, was in trouble and needed money. The caller had already spoken to his grandson and he was fine. The incident was logged, and the caller was advised to notify his local police department as well.
12:27 p.m. A caller reported witnessing a vehicle hit a wall on East Main Street, drive off, and pull in to the caller’s driveway. Sergeant Aaron O’Neil and Officers Moira McGaffigan and Benjamin Stickney responded and reported damage to the wall. A message was left for the DPW. A report was to follow.
5:13 p.m. On West Main Street, Officer Brian Sanchioni issued a verbal warning to an operator for speeding.

April 2
1:33 p.m. An alarm company reported a fire alarm activation at a West Main Street building. Officer Moira McGaffigan responded along with the Fire Department. The alarm was accidentally set off by a company working on the fire alarms.
2:31 p.m. A Bridle Path caller reported his mailbox was hit earlier in the day. Officer John Corridan responded to view the damage and took a report.

April 3
3:40 a.m. A Forest Lane caller complained of a loud mechanical noise coming from the clubhouse. Officers Brendon Lyver and Jessica Ferreira responded and found all quiet.
6:27 a.m. Sergeant Arthur Schofield assisted a disabled motor vehicle located in a hazardous spot on West Main Street.
7:41 a.m. A walk-in handed in a set of keys found outside of the front lobby.
7:00 a.m. A walk-in reported someone was stealing money from her. She already reported it to her bank. Officer Brian Sanchioni took a report.
11:06 a.m. A caller reported losing a Middlesex Savings Bank card and wanted it logged.
12:52 p.m. A caller reported a tree fell down on Cedar Street and it was blocking the roadway. Officer Moira McGaffigan and the DPW responded and removed the tree.
4:44 p.m. A Barbara Road caller reported an Amazon driver sitting outside of his home for a long time. Officer Derek Morton responded and checked on the driver and all was OK.
4:58 p.m. A Main Street caller reported her vehicle was taken without her permission. Officer Preston Mucciarone assisted.
9:03 p.m. Officer Derek Morton spoke with a caller who inquired about unreturned vehicle keys.

April 4
11:16 a.m. A Saddle Hill Road resident reported a person from a vehicle stole a package sitting outside her house. Sergeants Matthew McNeil and Timothy Brennan and Officers Matthew Santoro and Jay Deiana responded and checked the area with a negative find for a vehicle matching the description provided by the caller.

April 5
12:01 a.m. A UMass Memorial Medical Center employee requested a well-being check on a Woodview Way male trying to get his father into his car in order to transport him to the medical center. Sergeant William Burchard and Officer Stephen Buckley responded, and the father and son were gone upon their arrival.
6:35 a.m. A walk-in handed in credit cards and an out-of-town driver’s license found at a West Main Street gas station. Sergeant William Burchard assisted.
7:47 a.m. A caller reported the foyer door at a West Main Street bank was unsecured. Officers Ryan Polselli and Matthew Santoro responded, and a report was to follow.
11:53 a.m. Officer Ryan Polselli reunited a stray dog on Winter Street with its owner.
12:33 p.m. A First Road caller complained of loud music and smoke coming from a neighbor’s campfire.
4:10 p.m. A caller reported hearing loud banging noises on West Main Street in the area behind Cumberland Farms. Officer Jessica Ferreira responded and checked the area with a negative find.
4:53 p.m. A caller reported a group of kids playing and trespassing on high school fields on Hayden Rowe Street in violation of the governor’s orders. Officer Tyler Brabham responded and removed them.
7:11 p.m. A caller complained of noise and activity at the Hopkinton Sportsmen’s Club on Lumber Street. The incident was logged and the caller was going to follow up with Town Hall later.
7:38 p.m. A Norcross Road resident reported she found a loose pit bull and was unable to locate its owner. The animal control officer was contacted and was to assist.