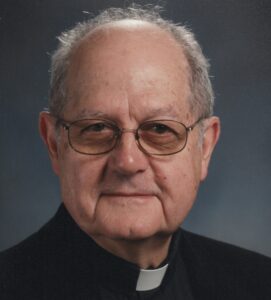 Richard E. Senghas, 94, a resident of the Piper Shores community in Scarborough, Maine, died Sept. 10 of natural causes. He lived an extraordinary life — a loving husband, father of seven, respected orthopedic surgeon, and, in his later years, a Catholic priest.

Richard was born June 30, 1928, in Cleveland, the son of Erwin William Senghas and Lydia Mueller Senghas. His devoted wife, June Murray Senghas, predeceased him in 1993. He graduated from Lakewood (Ohio) High School, Harvard College (1950) and Harvard Medical School (1954). In January 1955, he married Gertrude (June) Murray, a medical school classmate. Together they started their internships in Cleveland. They soon departed for Japan, where Dick was a medical officer for the Navy in Yokosuka and June worked as a pediatrician on the Army base in Yokohama. They returned to Cleveland to complete their internships and settled in the Boston area, where Dick furthered his medical training in orthopedic surgery at Children’s Hospital and Massachusetts General Hospital.

In 1963, he joined Framingham Orthopedic Associates, a private orthopedic surgical practice affiliated with Framingham Union Hospital (now MetroWest Medical Center) and moved with his growing family to Hopkinton. Dick also served as president of the medical staff at Framingham Union Hospital, attending physician at Bethany Hospital and clinical instructor at University of Massachusetts Medical School in Worcester. He joined the editorial board for the Journal of Bone & Joint Surgery, volunteered on the Hopkinton Board of Health and retired from orthopedic surgery in 1988.

After June died, Dick entered Pope St. John XXIII National Seminary in Weston and served as a chaplain intern for both Wellesley College and Central Maine Medical Center in Lewiston, Maine. In 1998, at the age of 70, he was ordained as a Catholic priest for the Diocese of Maine, serving in St. John the Evangelist and Holy Cross parishes in South Portland and St. Rose of Lima in Jay. He retired, first to Orrs Island and later to Piper Shores in Scarborough, Maine. Dick served as an officer of ecumenical and interreligious affairs for the Catholic diocese of Portland, on the board of the Maine Council of Churches and as an enthusiastic director of Piper Shores’ croquet tournaments.

His perspective as both a medical doctor and priest prepared him to be an advocate in Augusta, testifying on important legislative issues including climate change and the expansion of Medicaid. In March 2013, he told legislators, “Catholic teaching is that health care is a basic right, and there should be adequate and affordable health care for all, for all.”

Relatives and friends are invited to attend a reception of the body and liturgy of the hours at 3 p.m. on Thursday, Sept. 15, at St. Maximilian Kolbe Church, 150 Black Point Road, Scarborough, Maine. Rev. Senghas will lie in state at the church until 6 p.m. A concelebrated funeral Mass will be celebrated at 10 a.m. on Friday, Sept. 16, at St. Maximilian Kolbe Church with The Most Rev. Robert P. Deeley, J.C.D., as principal celebrant. Burial will take place at 11 a.m. on Monday, Sept. 19, at Glenwood Cemetery, 50 Glenwood Road, South Natick.

Arrangements are under the direction of the Conroy-Tully Walker Funeral Home of South Portland. Memorial gifts in lieu of flowers may be made to one’s favorite charity.