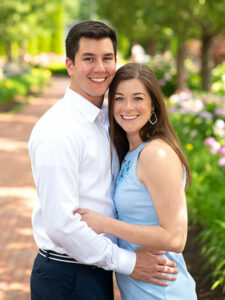 Kate graduated from Boston College in 2014 with a B.S. in biology and received a master’s in nursing from Regis College in 2017. She is employed as a nurse practitioner at New Jersey Pediatric and Adolescent Care in Wayne, New Jersey.

Paul also graduated from Boston College in 2014 with a B.S. in physics and received his J.D. from Georgetown University in 2017. He is a patent lawyer with the law firm of Baker Botts in New York City.

An October 2019 wedding is planned on Cape Cod.