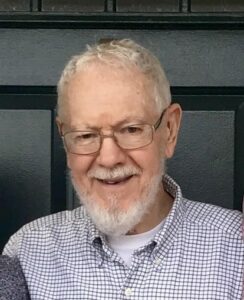 Bob worked for 27 years as a certified public accountant, retiring as a partner from Deloitte. Thereafter, he worked as a financial consultant and chief financial officer. He had a deep faith in God and was active in church his entire life, most recently worshiping at Pilgrim Church in Sherborn. His love for music was cultivated by singing and ringing in the chancel and bell choirs at church and as a member of the Highland Glee Club. He served both of these organizations for years as a volunteer, mostly in finance. Bob had a passion for God’s creation, whether exploring the national parks of the North American West or local waterways in his kayak, hiking extensively throughout New England or chopping wood. He also enjoyed genealogy and family history as well as travel to Europe and the Middle East.

If you choose, donations to honor Bob’s memory may be made to Pilgrim Church, P.O. Box 322, Sherborn, MA 01770, or the scholarship fund of the Highland Glee Club, c/o Jay Paap, 351 Waban Ave., Waban, MA 02468-1349. Due to COVID-19, no services are planned at this time. His final resting place will be in the family plot in Mount Vision, New York. Funeral arrangements are under the care of the Chesmore Funeral Home of Hopkinton.