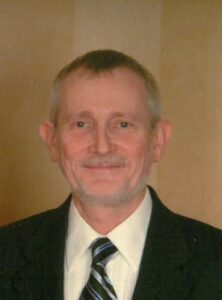 Ronald Benjamin Cobb, 71, of Milford, passed away Nov. 30 at Milford Regional Medical Center. Born at Fort Benning, Georgia, he was the son of the late Nettie “Marie” Guerin (nee Kearce) and Johnnie Benjamin Cobb. He is survived by his wife, Julia (Beverage) Cobb of Milford.

Ron grew up in Columbus, Georgia, graduating from Jordan Vocational High School in 1966. Not long after graduating he moved to Massachusetts to be near his mother and stepfather. An avid CB radio enthusiast, Ron combined that hobby with monitoring first-responder frequencies and volunteering with the Red Cross at fire scenes. His interest in public safety issues led Ron to establish a career at the Massachusetts State Police General Headquarters, then located at 1010 Commonwealth Ave. in Boston, beginning in the ident bureau and ultimately working on the plan to modernize the Uniform Crime Reporting (UCR) program in conjunction with the FBI.

Following the election of Ed King as governor, Ron accepted the position as special assistant to King’s secretary of public safety, George Luciano. During that period he also served as the state’s liaison with the International Association of Chiefs of Police (IACP). When Gov. King lost his bid for re-election, Ron left public service, and after a period of trying different occupations related to public safety, took a totally different direction to work in the restaurant business. Demonstrating a latent gift with and love for food, he worked at learning his craft to become a chef. He worked in that industry until his retirement. But his interest in public safety remained. He continued to support first-responders and often would be found monitoring fire and police channels, still recognizing what the various codes indicated.

Besides his wife, Ron leaves behind his sons, Eric Dustin Cobb and Justin Alexis Cobb, both of Milford; his brother, Lennie Guerin and his wife, Darlene, of Las Vegas; and his stepfather, Lawrence Guerin of West Newton and County Wessex, Ireland. He also leaves a son and a daughter from an earlier marriage: Douglas Marshall Cobb of Maryland, and Melissa Ruth Bailey of Virginia.

A memorial service was held Dec. 21 at Faith Community Church of Hopkinton, where Ronald was a longtime member. Arrangements were under the care of the Chesmore Funeral Home of Hopkinton (ChesmoreFuneralHome.com). In lieu of flowers, donations may be made to Wreaths Across America (wreathsacrossamerica.org) or the Gary Sinise Foundation (garysinisefoundation.org).