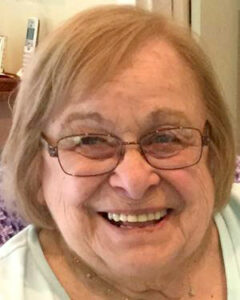 Rosanne (Bertolino) Thomas, 89, of Ashland passed away July 6 at her home. She was the wife of the late Ernest M. Thomas, who died in 2005. Born and raised in Framingham and a longtime resident of Ashland, Anne was the owner and operator of the Framingham Baking Co. until her retirement in 1995. She was an active member of the Ashland seniors and will be fondly remembered by her many friends and patrons for her infectious laugh.

She is survived by four children: Cheryl Thomas and her husband, Vincent Petruccillo, of Narragansett, Rhode Island; Joan Thomas of Framingham; Ernest Thomas and his girlfriend, Deborah Bishop, of Hopkinton; and Kathryn Rich and her husband, John, of Mendon. She also leaves five grandchildren, two great-grandchildren and one sister, Mary Bertolino of Hawaii. She was the sister of the late Aurellio Bertolino and Theresa Mahoney.

A funeral service was celebrated July 11 in the chapel of the Matarese Funeral Home in Ashland, followed by burial in Wildwood Cemetery in Ashland. In lieu of flowers donations may be made to the Ashland Emergency Fund, P.O. Box 112, Ashland, MA 01721.