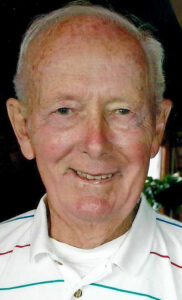 Murray F. Viehl, 88, passed away July 25 in Revere following a lengthy illness. He was the beloved husband of the late Marie A. (Bowman) Viehl, who passed on Dec. 6, 2015.

Murray was the devoted father of Elizabeth J. Viehl-McKenna and her husband Thomas of Revere and Boca Raton, Florida; Patrice A. Viehl of Everett; James O. Viehl and his wife Anne of Salem, New Hampshire; Kenneth F. Viehl and his wife Erin of Pocasset; and the late Thomas M. Viehl. He was the cherised “grampy” to Courtney M. Pyne and her husband Michael of South Boston; Sarah A. Viehl of Hudson, New Hampshire; Michael T. Viehl of Boulder, Colorado; Emily N. Viehl of Salt Lake City, Utah; Nicholas J. Viehl and Alexa V. Viehl, both of Hopkinton; and Elizabeth R. McGonagle and Victoria M. McGonagle, both of Everett. He also is lovingly survived by his daughter-in-law, Stephanie Viehl of Hopkinton.

Murray was an Army veteran of the Korean War and a member of the Revere Knights of Columbus, Council 179. He was a member of the Class of 1952 at Boston College. He was a retiree of Bank of America (Shawmut Bank and Bank of Boston).

A funeral mass was held July 29 in the Immaculate Conception Church in Revere,  followed by interment in Holy Cross Cemetery, Malden. Services were under the care of Vertuccio & Smith funeral home (vertuccioandsmith.com).