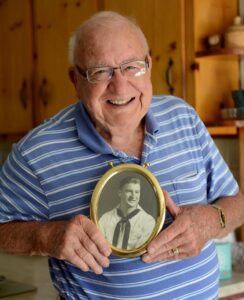 Roy D. Stratton, 95, of Westborough and formerly of Hopkinton, passed away at Milford Regional Medical Center on April 14 from complications of COVID-19. Born in Ashland, he was the son of the late Doris W. (Bernard) and Alvin E. Stratton. He was the husband of 64 years to the late Mertice E. (MacKay) Stratton.

A Navy veteran of WWII, Roy served as machinists mate second class aboard the USS Appalachian. Prior to his retirement in 1987, Roy worked at Kiddie Fenwall in Ashland for 41 years. He was a past legion commander and a lifetime member of the Hopkinton Legion, a member of the 1/4 Century Club at Fenwall, a member of over 50 years of the Hopkinton Masons, and a member of St. Paul’s Episcopal Church in Hopkinton. He enjoyed golfing and gardening.

Roy is survived by his son, Roy D. Stratton Jr. of Upton and his fiance, Holly Parkin of Connecticut; two daughters, Sue George and her husband, Philip, of Upton, and Janis Bunting and her husband, Charles, of Charlton. He also leaves behind two grandchildren, Tori Stratton and Bryan Ordway. He is predeceased by his siblings, Merrill H. Stratton and Alvin Stratton.

Funeral services and interment at Evergreen Cemetery in Hopkinton are being held at a later date. In lieu of flowers, donations may be made to Hopkinton Legion. Arrangements are under the care of the Chesmore Funeral Home of Hopkinton.