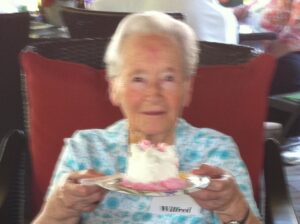 Ruth Lorraine Fecteau Holmes lived her dash from Sept. 5, 1923, to Aug. 4, 2020, as a daughter of Wilfred Fecteau and Isabel DeWolf, wife of Robert Swasey Holmes, and mother to Lorraine (affectionately known as Muffet) Holmes Martorana. Ruth passed peacefully at the age of 96 in the loving care of Hospice of the Valley in Gilbert, Arizona, due to COVID.

She was raised in the loving Fecteau family in Hopkinton. After high school Ruth attended and graduated Wilfred Academy of Cosmetology and worked under the watchful and loving eyes of her Aunt Rose at Rose’s shop on Main Street in Hopkinton.

Ruth married Robert on Aug. 5, 1946. Initially they lived and worked in Hopkinton, owning a dry cleaner. Eventually they moved and bought property and built AAA-approved Midway Motel & Cottages in North Eastham on Cape Cod — their pride and joy.

Upon retiring they relocated to Mesa, Arizona, and there they lived out their remaining years. Throughout their lives they enjoyed traveling on land and sea, north, south, east and west. Even after Robert’s passing in 2005 Ruth continued to travel, her favorite mode of transportation by then being cruise ships.

Ruth’s daughter respectfully requests that you can remember Ruth by toasting to her with her favorite beverage, chocolate milk.

A private burial will take place Aug. 11 at Evergreen Cemetery, Hopkinton. Arrangements have been entrusted to the Callanan Cronin Funeral Home, Hopkinton.